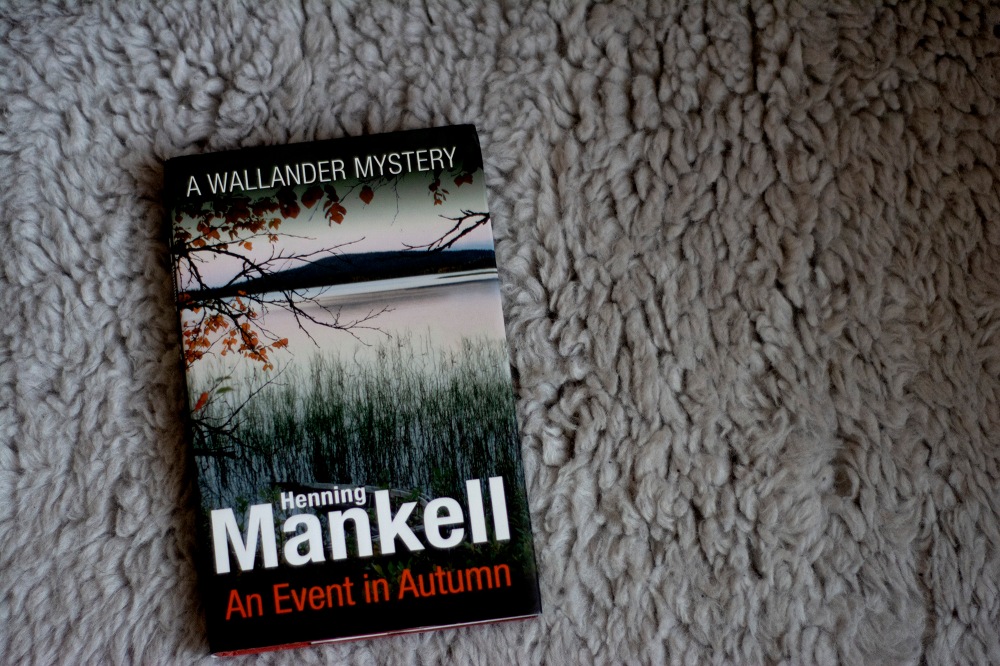 Henning Mankell- An Event in Autumn, London, October 2014 It was, unsurprisingly, a rainy autumn day in London, we were tired and soaked, walking by the grey Thames melting into the grey sky, and looking for a pub. But first, another bookstore, my boyfriend a wet statue of resignation as I got lost among the shelves, politely dripping just a little bit of water here and there. A thin book caught my eye- the last Wallander, not chronologically, but in the order of apparition in English. I’d said my literary&literally teary eyed goodbyes to Wallander while reading The Troubled Man, and knew that Henning Mankell himself was very ill at the time, he would pass away in the autumn of 2015. An Event in Autumn thus felt like a double farewell to a strangely addictive world of dark tales of despair, yet always infused with an almost inexplicable hope and faith in humanity. At some point I grew a bit tired of scandi noir and stopped reading it, but I still cherish my Mankell collection (two volumes came at the price of one from a garish stall near Roma Termini station) and fondly think of Kurt Wallander as a wise old friend.

Haruki Murakami- Tutti i figli di dio danzano, Turin, February 2015 Saturday morning and the city is covered in thick, milky fog, from my hotel I am supposed to see the Mole Antonelliana, but all I can discern is the slight curve of its roof- at night it would light up like a neon ghost, with Fibonacci’s numbers twinkling like low lying stars. I enter a bar and slide my one euro coin over the formica counter, the waiter automatically slides an espresso in reply, I sip it slowly while reading captivating regional football news in Tuttosport. I then set out under the arches protecting me from a slight drizzle and proceed to methodically enter every book store I see, finding this Murakami, the last of his books I had not yet read. Borges said that heaven is a library, alternatively, it is a day spent doing nothing but visiting book stores punctuated by the occasional espresso. (Love letter to Turin to be found here.)

Diego Maraini- L’interprete, Milan, February 2015 The magnitude of my dislike for Milan is the stuff of legends, so of course I got stuck in the city for a week, strictly for business requirements- for that’s what Milan is, a business requirement, an unpleasant deadline, the meeting that could have been an email, the colleague who asks you the same dumb question a million times. At the end of a miserable metro ride (alright, it was just an average big city metro ride but I like to dramatize anything related to Milan) I did however disembark along the Navigli, which, I grudgingly admit, have a certain charm and then accidentally ended up in a second hand bookstore which consisted of giant piles of absolutely random books. Next to these piles were people who looked like they’ve spent at least the past couple of weeks inspecting them, all holding already claimed loot. The Interpreter was graciously lodged at the middle of a pile, so I carefully extricated it and read a little, assuming it would be about someone who finally finds the universal language. Spoiler: he does not. (More extensive complaints about Milan to be found here.) 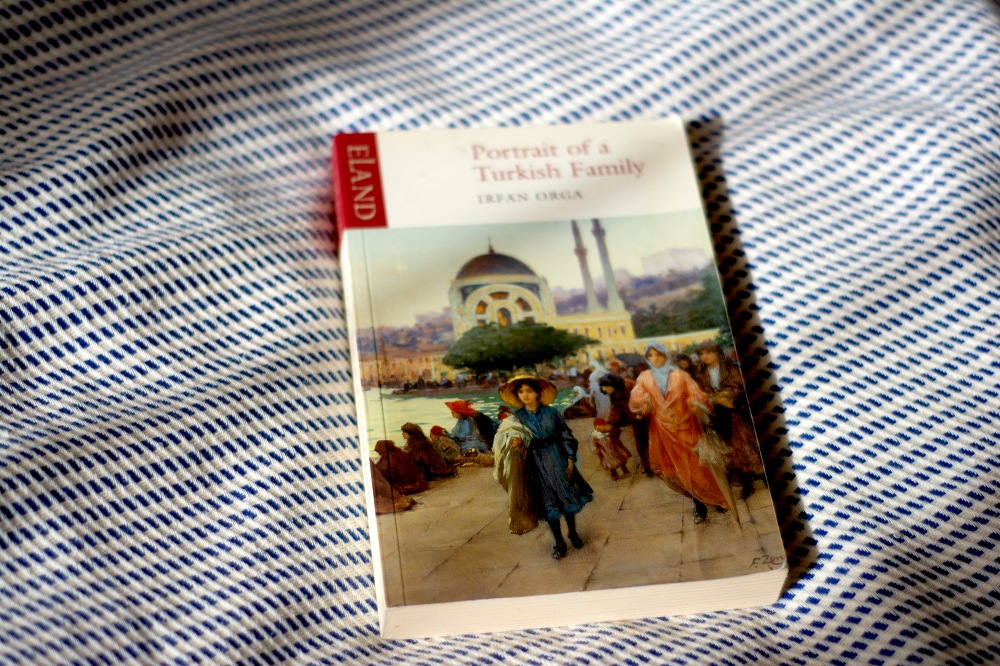 Irfan Orga- Portrait of a Turkish Family, Istanbul, March 2015 Within an hour or so of arriving in Turkey, once the pleasant initial thrill of the family reunion has passed, my boyfriend becomes a man with a mission: he is, by all means available, to have kokoreç, which are, pardon my French, fried lamb or goat intestines.  Needless to say, I do not share this questionable passion, yet Turkey is such a magnificent land that a kokoreç restaurant will never be too far away from various shops, such as the bookstore on Istiklal avenue where, while he was patiently waiting for his order, I spent an inordinate amount of time over a wonderful Turkish hard copy of Pamuk’s My Name is Red lamenting that I do not speak the language and then bought Irfan Orga’s book, which although less known than Pamuk’s works, is an exquisite way of getting a glimpse into the fascinating history of a country that is a world to itself.  (Some further glimpses of Istanbul here and here.)

Italo Svevo- La coscienza di Zeno, Trieste, October 2016 ‘Just’ crossing borders still gives me the kind of pure joy and illicit thrill I’d love to explain to those who have never felt afraid of a border crossing, clutching their ink smeared passports and various explanatory documents in their sweat drenched hands (say, people who voted for Brexit). So gliding through seamlessly from Gorica to Gorizia, their difference a matter of spelling at first glance, a history of bloody wars if you dwell on it, felt quietly exhilarating. Then we were driving up steep streets with the sea coming in and out of view, a glimmering sun drenched blanket of deep blue stillness on a perfect autumn day. I expected Trieste to be haunted by ghosts, those of the Habsburg Empire, Joyce, of course, whose memory lives on in the Caffé San Marco where La coscienza di Zeno and several other topical readings (Jan Morris’ Trieste, for one) were bought to the endless delight of a shop assistant who said she was always so happy when people bought this many books. Yet trying to navigate the sloping maze of streets in the warm Adriatic breeze, windows lowered so we could occasionally ask for directions, anchored me in an unexpected present that was exclusively mine. (More immediate musings on Trieste to be found here.)

Poètes de Lisbonne, Lisbon, April 2015 I have developed a habit by which, whenever I find myself in some sort of existential crisis, I randomly open Fernando Pessoa’s Book of Disquiet and read the first lines my eyes fall on. Today it went, on page 188 of the English copy I own: ‘Since life is essentially a mental state and everything that we do or think is only as valuable as we think it is, it depends on us for any value it may have.’ and that is all the advice I needed on a gloomy and cold spring day stuck inside the house in front of my computer. I had actually felt compelled to buy a Portuguese copy of the Book of Disquiet when in Lisbon, but finally gave up and went for a selection of poetry, with each poem printed both in Portuguese and French, and I find strange solace in deciphering their parallel meanings lost in that maze of Romance languages I feel to be a defining trait of my particular existential journey. (Some evidence that Lisbon makes a poet of me to be found here.)

Leonard Cohen- Let Us Compare Mythologies, Paris, June 2017 I was aimlessly wandering around Paris, which is basically the only legitimate way to move around Paris I can think of, admiring the midsummer evening light, so intense as compared to that of Budapest, lying at the easternmost edge of its time zone, and thus being brighter in the morning than come evening. I went to Shakespeare and Company, of course, and, upon exiting, had three very chubby and friendly rats graze my ankles in another quintessential Parisian feeling. I then made my way to The Abbey Bookshop, which is Canadian, and must therefore absolutely stock Leonard Cohen, and surely it did. So I sat in a narrow space among tall shelves and remembered that devastating November morning half a year before when I woke up feeling like the world would end, did not really understand why,  and then read in the news that Leonard had passed away. I sat there, touching the cool hard cover of this slim book, the shelves were tall and made of heavy, dark wood, and amidst them shimmered the last rays of the setting sun. This was the crack where the light gets in. (A glimpse of summer evening in Paris here.)

Andrea Camilleri- Il birraio di Preston, Genova, April 2018 For every terrible meal that Kurt Wallander suffered through, say dry rye bread with fish leftovers, down in the sun soaked south Salvo Montalbano had sumptuous plates of pasta overflowing with the rich sauces of plenty, made for him by the house maid who was also, obviously, one of his prime links with Mafia informers. Il birraio di Preston, the dog-eared copy of which fell into my lap in a bookstore by the name of Bookowski, having been previously owned by a certain Giorgio Robotti who stamped his name on the first page in Latin and Arabic script, is not a part of the Montalbano stories, but a collection of short stories set around the turn of the 20th century in Sicily. It is however permeated by the same wry sense of humour and benevolent love for even the most fallen elements of humanity- Camilleri’s stories are to me the definition of the comfort read, fluffy and delightful like the filling of a cannoli, with a rough bitter almond of truth right at the core. (Round up of clueless visit to Genova here.)

Rumena Bužarovska- Moj muž, Belgrade, October 2017 I walk quietly through the bookstore, breathing in its scent of freshly printed paper and jasmine green tree wafting through from the small tea area at one end. I carefully open books, caress their covers and ask them the same question: where do you stand compared to the limits of my comprehension of a language that is a beloved but strange land I am yet to conquer. There are territories completely beyond me, shrouded in mysteries and Cyrillic script. There are territories with which we share borders, but their bulk is still beyond the horizon. And there is a pale blue book with clear, simple, straightforward sentences, a territory I can anchor myself in. This book, originally written in Macedonian, is the first ‘full’ book I ever read in Serbian and as such, a small victory I’ll always fondly remember. (A bit more of Belgrade here.) 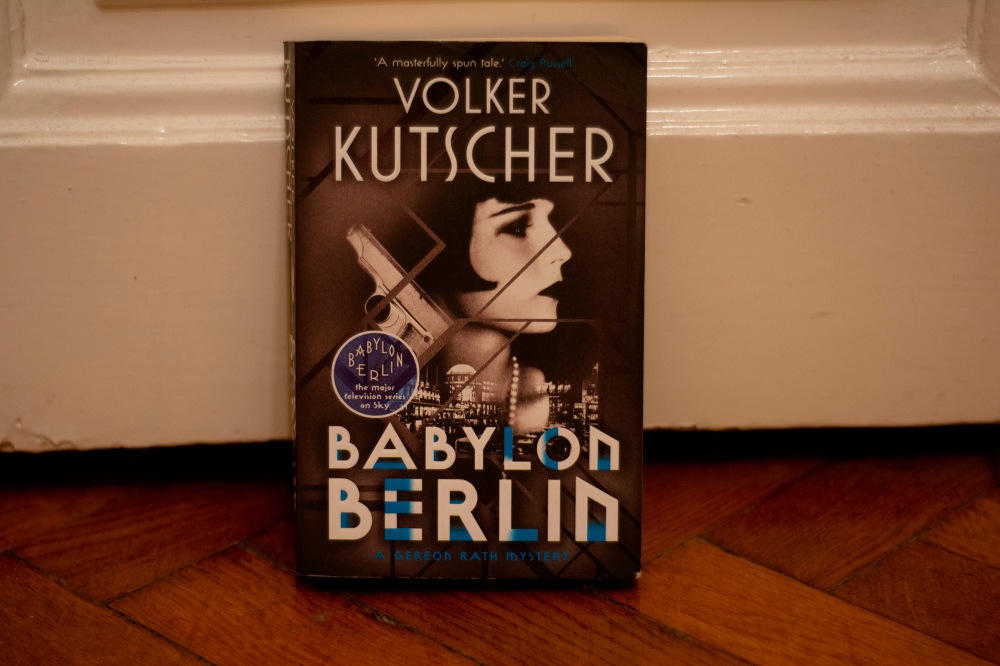 Volker Kutscher- Babylon Berlin, Berlin, November 2018 I feel almost guilty when I steer towards the ‘locally themed reads’ piles in bookstores and then of course do it all the time- I have skipped many such undertakings from this list, Calvino from Turin, A Moveable Feast from Paris, Momo Kapor from Belgrade, to name a few, and included others. My curiosity for the book version of Babylon Berlin (I loved the series), was piqued by the fact that it has several intriguing differences in the plot and character arcs. As such, the two become parallel universes, worth exploring on their own, or together. The detective in the book is closer to the classical hard boiled breed than the one in the series, and as such has a favourite cocktail, the Americano- in the series, Rath is more of a traditional German beer fiend. Let’s read then, in our living rooms and toast with everyone’s drink of choice to that time when we’ll be hoarding books and memories again. (I may have had a couple of drinks myself when I wrote this.)

In case you’re curious about part one, it exists!, and it’s here.