Having found ourselves in Vienna on a particularly lovely summer’s day, we decided to do some things we’ve done before: briefly visit the Hundertwasserhaus (glad to report people are still posing with empty looks on their faces in front of the fountain), have cakes in Demel (glad to report the waitresses are still the same stern but professional matrons and the street outside still reeks of horse from the Spanish Academy’s stables) and cocktails in Loos bar (glad to report they still have ground rules they don’t adhere to, such as no entry for men in shorts).

We did however have some novel plans as well, such as checking out Jonas Reindl, which recently ended up right at the top of a best coffees in Europe list. Admittedly, I’d had my doubts on the validity of said list, as it contains places from Budapest, but not Espresso Embassy, which is, simply put, the epitome of wrong. Trying to remain open minded, I went for a flat white and a cinnamon whirl, but neither managed to tickle my palate in a particularly pleasant way, and were a bit pricy given their averageness, I do however allow everyone to be the judge of what they like best. Suffice to say that if you were to ask for my advice, I’d recommend either one of the old school Viennese coffeehouses, like Central, or from the more recent crop, Phil or kaffemik.

Our main goal was however an elevated lunch in the Donauturm, which, in spite of its striking resemblance to the Stuttgart and Berlin Fernsehturms, was never meant for television broadcasting purposes. This fact led to an acrimonious row among German speaking Wikipedia contributors over the exact category of tower it should belong to. Alas, no real consensus seems to have been reached, but at least they proved the Germanic penchant for phenomenology and scientific exactitude yet again. This naturally calls for dates and numbers: the tower is, with 252 metres, the tallest structure in Austria and was inaugurated in 1964 for the momentous event that was the International Horticultural Show of Vienna, though the connection between a metal structure and tomato saplings somehow escapes me. In trivia related to recent cultural phenomena, one of the closest buildings to be admired from the tower is the headquarters of the International Atomic Energy Agency, where Valery Legasov undertook to convince the world that Chernobyl was but an unfortunate trifle.

In order to admire the agency (and some frankly better looking things), you will of course need to make it to the tower, which can be approached either by metro line U1 (Alte Donau station) or U6 (Neue Donau station). From there you can take either the shuttle bus- which on weekdays only runs after 4 PM- or bus 20A, which is generally a bit scarce, running about every half an hour. These hard facts of life became obvious to us only once we’d made it to Alte Donau and had about 10 minutes to spare until our reservation, so our top tip here is for walkers: if you want to make it to the tower on foot from Alte Donau, beware that your path shall be hindered by a lake, which lake has but one bridge.

The ticket costs 14.5 euros (9.90 for kids, see what they are doing here) and can be purchased ahead on the Donauturm website, though weekday attendance doesn’t necessarily call for such precautions. As soon as we arrived we were whisked up with one of the two lifts, which make the journey to the viewing platform, situated at 150 metres in about 30 seconds. Besides the viewing tower, there are also two turning platforms serving as a café and a restaurant- booking ahead is advised, and you need to pay the entry ticket first. The revolution time of our platform was officially 26 minutes, though it felt somewhat faster than that: should you feel a bit dizzy, which misery befell the blog’s industrious co-photographer, you can briefly return to the bathroom area, which is in the tower’s fixed central structure. The restaurant’s offer is not overly complicated, and concentrates on some local staples, such as a schnitzel about the size of the city itself, but our dishes were tasty, and the prices are not as steep as one would imagine for such an unusual location. The most expensive main course is the Danube catfish at 26 euros, but in case you find this way too kind on your wallet, a bottle of Roeder Cristal champagne will set you back by a more considerable 350 euros, though you may console yourself with the thought that this particular cuvée was created for Tsar Alexander II.

Should you feel a bit heavy after the meal (which is highly likely given the size of the schnitzel) and want to walk it off, the 775 steps that could take you downstairs are off limits: they are only open to the public during the Donauturm run, which sounds like a particularly masochistic, so probably highly popular undertaking.  You can nevertheless stroll through the surrounding Donaupark and occasionally catch a glimpse of the Donauparkbahn (or Liliputbahn)- a small train-looking contraption which we felt must be an urban legend when we first spotted its narrow rails, but which miraculously surfaced right when we’d given up all hope. A ticket for a full ride costs 4 euros for adults and 2.5 for children, and in case you develop a total obsession for the vehicle, you can also purchase a daily ticket for 10 euros. For those seeking more refreshing summer thrills, the beaches of the Strandbad Alte Donau are a stone’s throw away, and look like an interesting proposition- in spite of its name, the Alte Donau, formerly a branch of the Danube, is by now a lake and as such has visibly cleaner waters- looked at from the tower, there is indeed one Blue Danube, and it’s not the river. 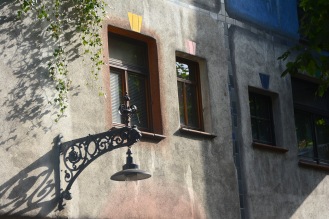 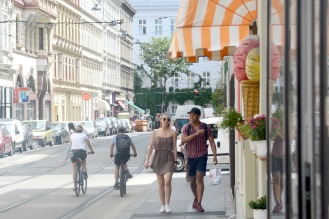 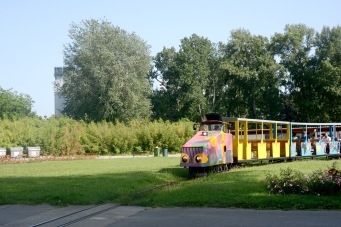 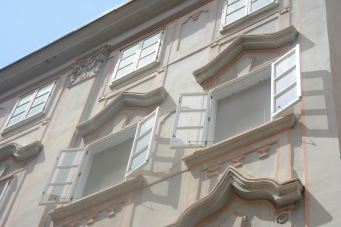 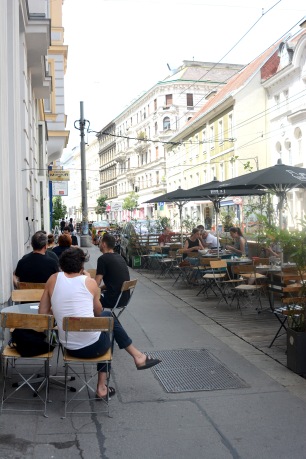 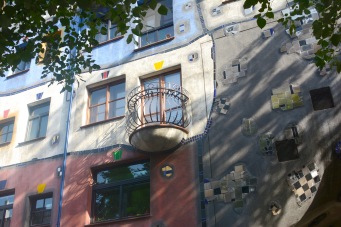 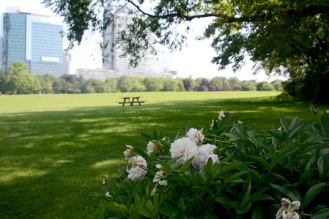 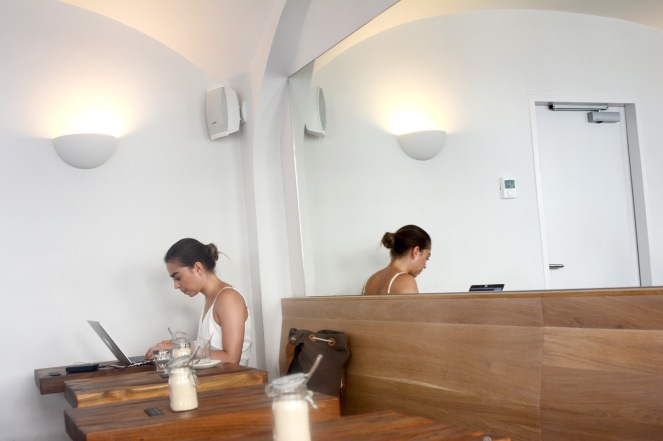 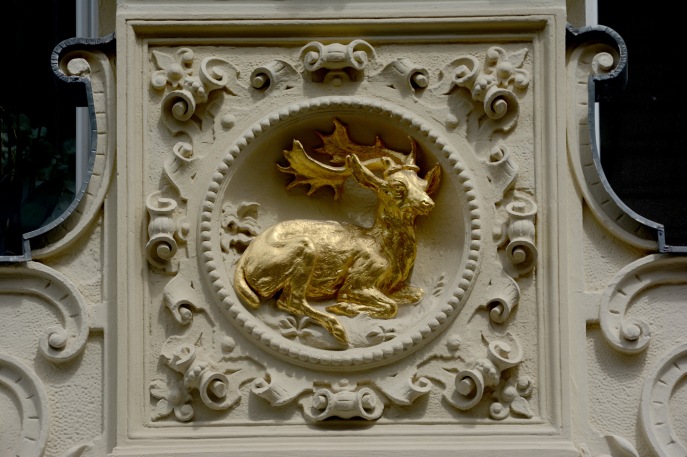 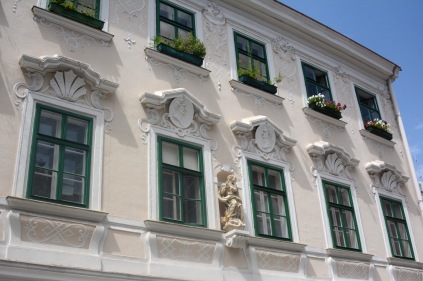 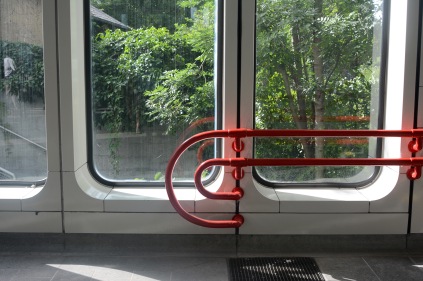 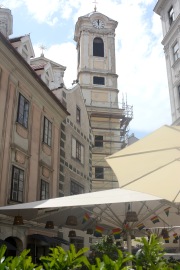 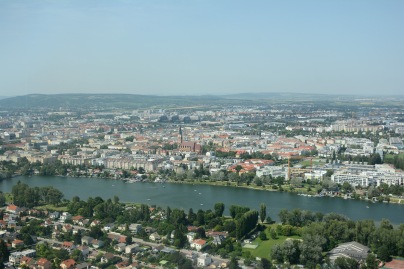 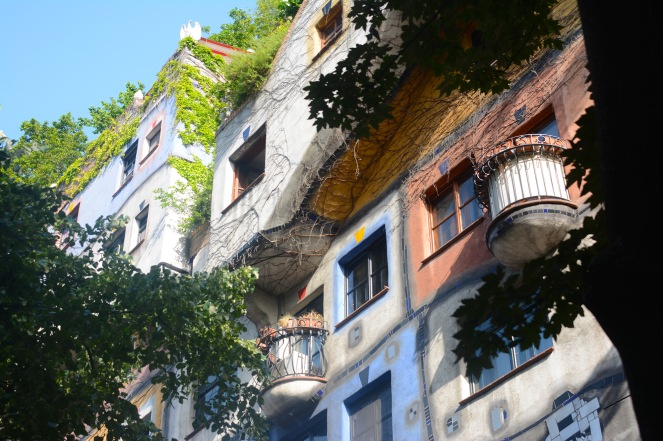