Since our stay in Cyprus was short but sweet, we did not get the chance to fully delve into its intricacies, of which there are many, particularly so if you take into account its size. It is however the third largest island in the Mediterranean (after Sicily and Sardinia, if you insist to know) and the third most populous as well, with about a million inhabitants if the population of its two halves, living in a rather fractious cohabitation, are added.

In a stroke of either great luck or major misfortune, it is pretty strategically located on the sea route to the Middle East, and has thus piqued the interest of a great many nations, which insisted on laying claim to it sometime through history. We must however start by mentioning that in prehistoric times it was inhabited by dwarf hippos and elephants, who sadly went extinct and were later followed by the Greeks, Phoenicians, Assyrians, Egyptians, Persians, Romans, Knights Templar, French (this is where it starts to get real scary), Venetians, Ottomans and finally the British.

Independence came along in 1960 but only led to further complications. Following a coup by the Greek military junta in 1974 (they favoured the poetically named project of enosis, which involves all Greeks outside Greece proper being reunited with the motherland, also known as Megali Idea), Turkish troops moved into the north, and have been staying there ever since- a lovely evidence of that being the Northern Cypriot flag proudly flashing its intermittent lights from a hillside, on display for all those approaching Nicosia from Larnaca airport at night.

Thus, when The Republic of Cyprus joined the European Union in 2004, although de jure it holds sovereignty over the entire territory of the island, it was only the Southern territories which became included- the borders were however somewhat relaxed in 2008, so these days Nicosia’s main drag, Ledra street comes fitted with a border crossing.

The whole arrangement does have the faint smell of a rather silly game of make pretend played by adults, with fascinating quirks such as the fact that, since Northern Cyprus, following Turkey’s lead, chose not to switch to daylight saving time, Nicosia becomes every half a year the only capital in the world belonging to two time zones. The very name of the place is also cause for confusion- travelling on Cypriot roads (left hand traffic, because why not and Britain) I noticed no signs pointing to Nicosia, but plenty to Lefkosia, which made somewhat more sense since I knew that the Turkish for it is Lefkoșa. Lefkosia then, is the Greek, but the French (obviously them) were seemingly unable to pronounce it as such, went for Nicosie, which was then turned into Nicosia by the Venetians and we’ve all been playing along ever since, except the locals themselves. 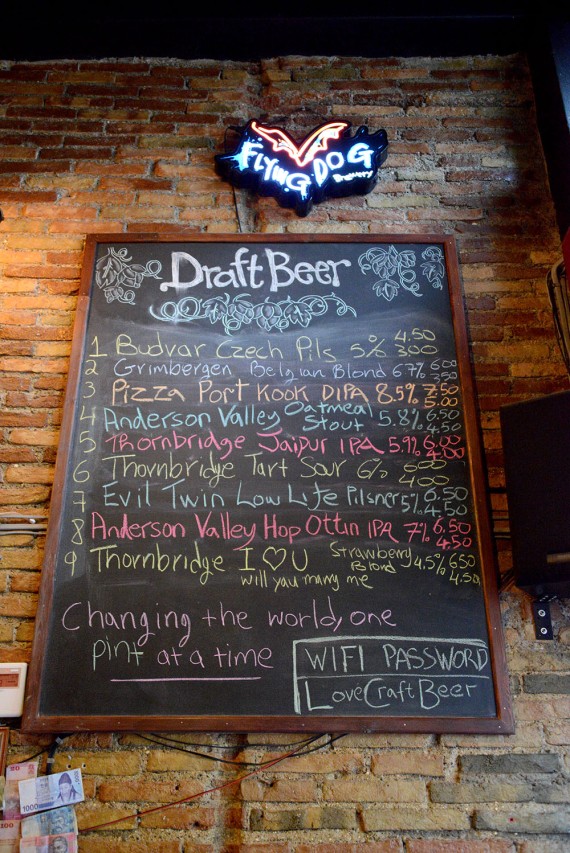 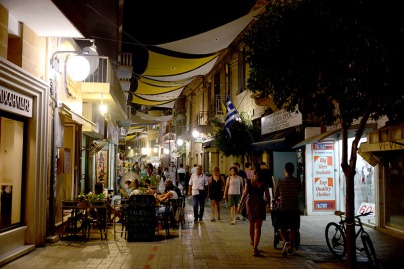 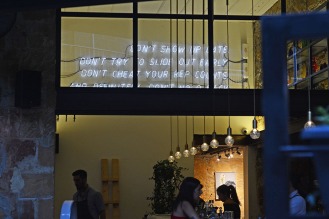 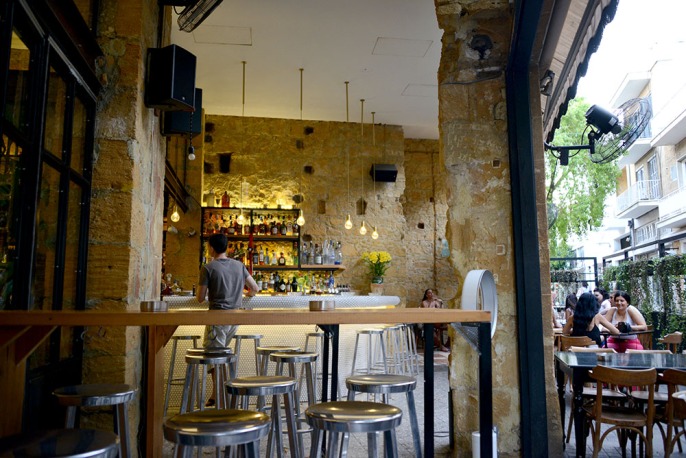 Once you adjust to the fact of being in a slightly particular place (and eerily enough only about 100 or so kilometres away from Syria), the southern half of Nicosia reveals itself to be a rather typical Mediterranean town, with whitewashed houses, the rowdy terraces of restaurants and bars overflowing into the streets, and an active and well-organized population of felines. Because fun facts tickle me pink, let me here mention that the earliest signs of human-feline cohabitation, namely a grave containing both a human’s and cat’s remains, were discovered in Cyprus, and are estimated to be about 9,500 years old.

Returning to the equally fascinating matter of pubs, the briefness of our stay did not prevent us from identifying, with some welcome local help, two exciting establishments. The first is rather cheekily called The Gym, but the most exercise you’ll be doing there is lifting plenty of glasses to your lips- our recommendation is the Taste of Mediterranean cocktail, which contains mastika (a traditional Greek drink made from the resin of the mastic tree, quite tantalizingly delicious). Close nearby we bumped into a craft beer pub as well, BrewFellas, sadly a bit understocked on local brews, but offering several international favourites.

The relative irrelevance of beer in Cyprus (besides their already mentioned love of Carlsberg) is of course explained by it being mostly a wine country. The hillsides of the Troodos mountains, which, peaking at almost 2000 metres with Mount (not the Zeus one) Olympus are often snow covered in winter (this seemed outright impossible on a July day with temperatures to the north of 40 degrees Celsius), are also the home of two indigenous grape types-Xynsteri and Mavro. These grapes are used as the basis of the local spirit zivania and of the Commandaria dessert wine, and they are also special in that they grow on ancient rootstock, unlike most continental grapes, which grow on Northern American one, as a result of the phyloxera epidemic- for once the island’s remoteness from mainland Europe did it a service.

Since July can get somewhat warm in these parts of the world (thinking here of Mordor, the fiery furnaces of hell and the boiling surface of the sun levels) one will perfectly understand Cypriots being enamoured with freddo coffees (there’s espresso, cappuccino and latte as well), which involve ice being ground into them, and then the whole thing being topped with more ice. These are possibly best enjoyed while sitting in a pool of ice and watching a cat with an ice cube tied to its tail- the long and the short of this being that we’d love to return to Cyprus and scratch deeper beneath the surface, but perhaps early October is a better time for that. 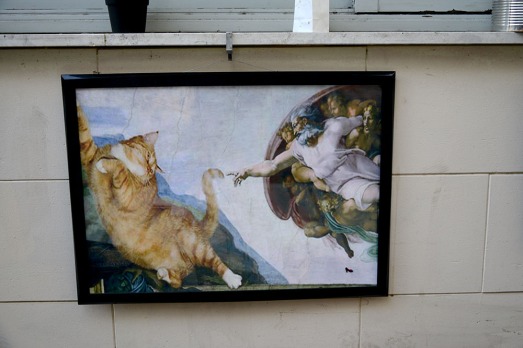 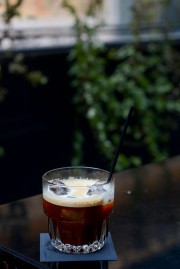 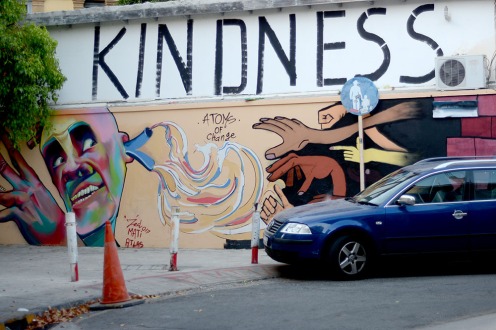 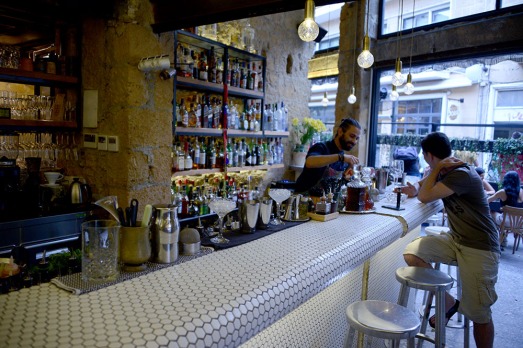 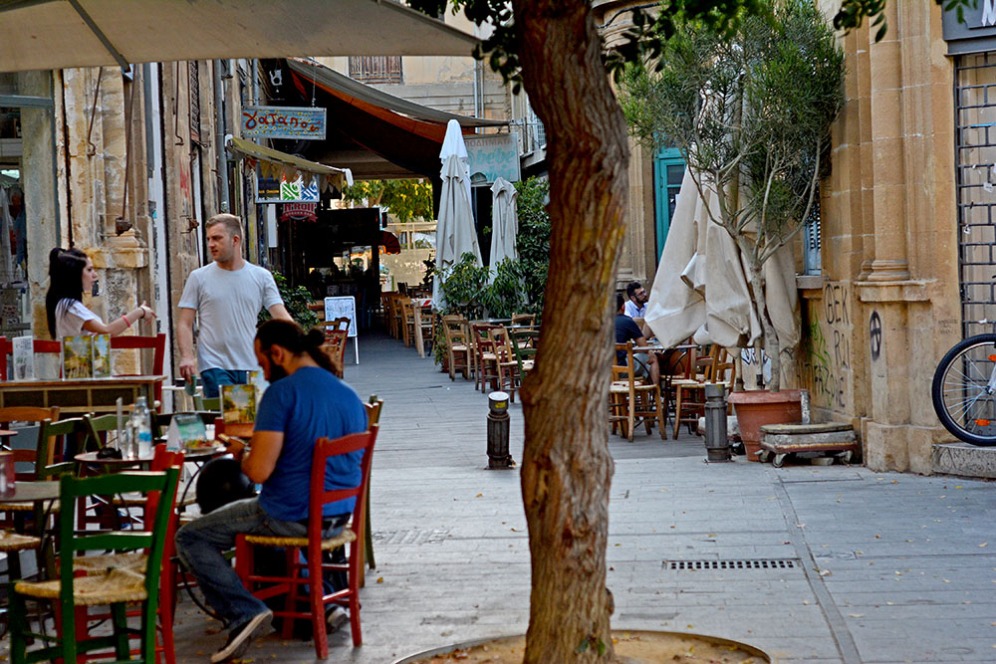