To quote Blur (and it’s very nice to start a post by quoting your favourite Britpop band), modern life is rubbish. These days, instead of going out onto my balcony to investigate whether I feel mildly cold, just plain old cold, or hideously cold, I constantly refresh the alpha and omega of all Hungarian weather related knowledge, Időkép, to check how the temperature evolves in the centre of town.  And all the time my heart flutters a little when I see one spot with positive temperatures right in the middle of the city. That blue spot is the Danube, hovering at a pleasant 3 degrees Celsius, surrounded by deep red dots with scary minuses involved.

This then means that it cannot yet be completely frozen over, like in those ancient times when King Matthias was elected- yet apparently not crowned, as opposed to popular belief- on the ice of the river. Because it seems that when you’re the elective body of a state and you have some important business to do, you always look for the most scenic spot in town- frozen river, how literally cool, let’s do it. We’re not as lucky though- albeit it might be a somewhat relative situation in terms of luck, since a completely frozen river would probably mean pretty Arctic temperatures for a petty long time- and we have to make do with ice floes majestically making their way downstream and crashing with rather ominous rumbles into Budapest’s many bridges. 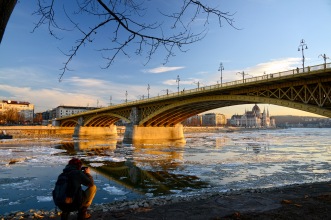 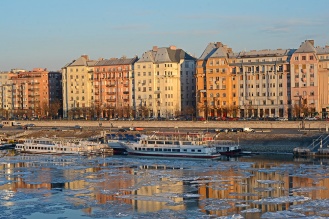 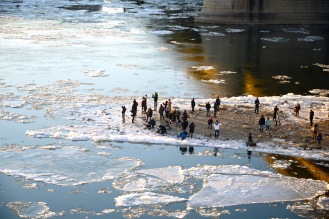 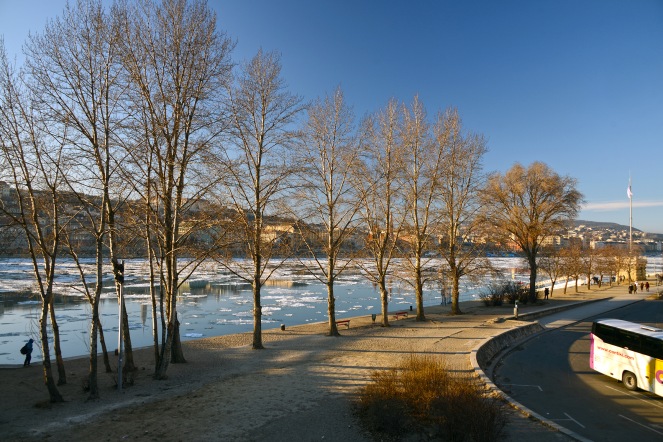 Some people have seemingly found swans on the river too, but since I’m scared of swans (especially the evilest sort, those in Bled) I was pretty relieved to only encounter ducks. Now ducks I like, quite a lot, and seeing how they float around undisturbed by the ice and dozens of people shooting them, though mercifully with cameras only, I am now even more in awe of their cute yet plucky nature.

I thus considered ducks my temporary spirit animals as I trudged on in the icy wind- actually, I might be exaggerating just a wee bit, because walking in the sun was almost pleasant, if it weren’t for my fingers growing irrationally cold and sore- I googled that, as everyone in their right mind would, and it’s a condition alright, but I am relieved to know it won’t kill me.

Many others also felt that floes on the Danube are exciting enough to bundle up and brave the winter sunshine and thus the bit of land peering out of the river at Margit bridge’s foot looked like footage from David Attenborough’s Frozen Planet with humans standing in for penguins- I am not discriminating against seals here, but thankfully no one was lying on their stomach ready to dive into a leak. So presently the only thing missing from the full winter treatment in Budapest is some snow- though I am not overconfident about that at this point, given the rather anemic attempts so far, but let’s hope the season still has some aces up its sleeve, though perhaps not of the drowned in snow in late March sort. 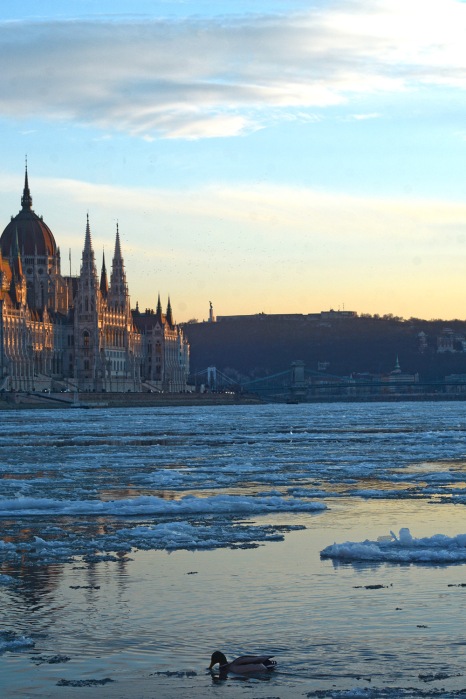 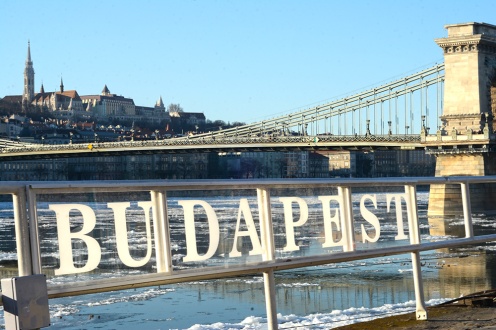 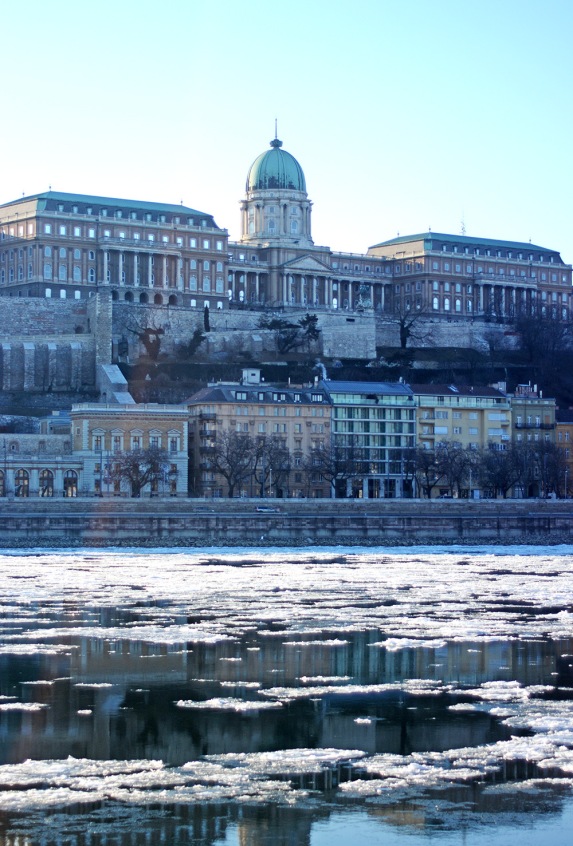 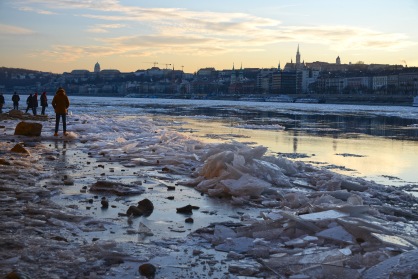 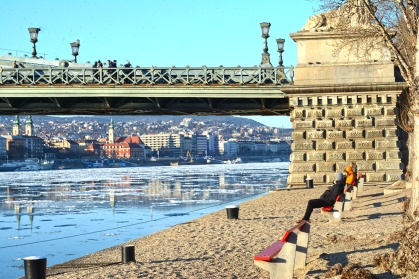 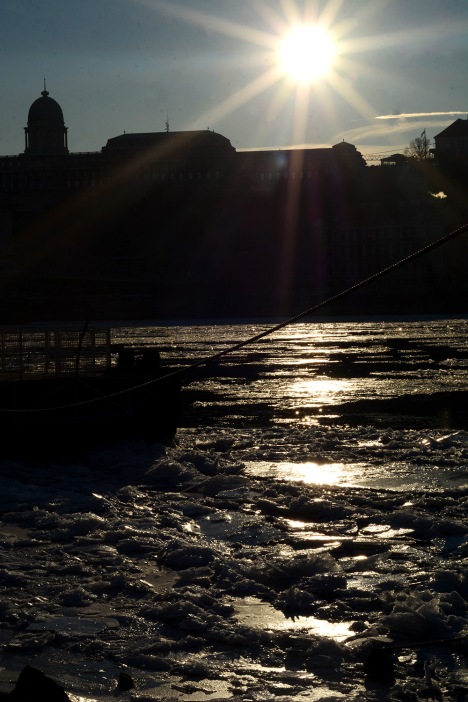 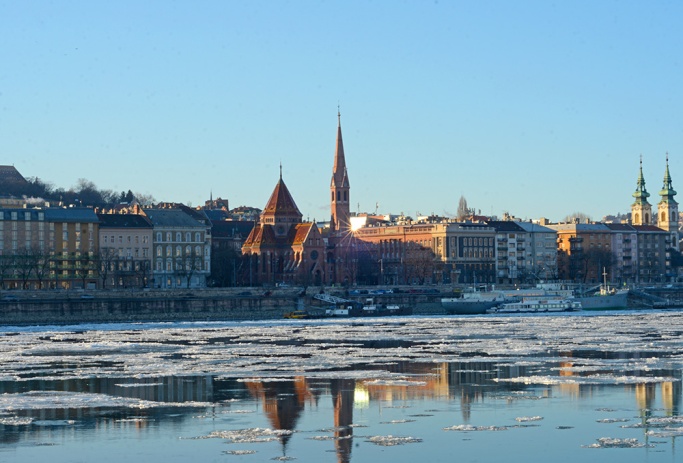