The airport is just a glorified hangar, and much as I had rehearsed looking at Sarajevo as just another tourist destination, I know all too well I’d seen this place before, on grainy footage of UN planes landing and taking off amid occasional shelling. As our driver makes steady progress towards the city centre, conversing in Bosnian with that self-assured Balkan congeniality which takes your knowledge of the local language for granted, I recognize other ’landmarks’ as well, the neighbourhood of Grbavica, which remained under the control of Bosnian Serb troops during the siege (as seen in the film of the same name), the eerily Technicolor shades of the Holiday Inn, where the foreign correspondents were located, as seen in Welcome to Sarajevo. Street corners suddenly look familiar, perhaps from the black and white picture of a woman ducking for cover on her grocery run, I identify bridges which now bear the names of those who paid with their lives for the audacity of trying to cross them, people with names ranging across the entire spectrum of ethnicities and religions that once made up, and still make up, Sarajevo.

Because in spite of the senseless bloodshed, or maybe exactly because it had to live through something so profoundly inexplicable and irrational, Sarajevo feels timeless, or perhaps it hovers out of time, isolated in its own continuous present, just as it is physically tucked between mountains, a lush valley surrounded by the towering peaks of Treskavica, Bjelašnica, Jahorina, Trebević and Igman, the latter two forever entwined with that most mythical of Sarajevo winters, that of 1984, when it hosted the Olympic Games, the insignia of which still proudly greet you from the first big crossroads after the airport to every souvenir stall in the Baščaršija. The raw spring green of the mountainside is overwhelming, as a fellow traveler from Poland observed, you don’t meet greens like these anymore, not even in the heavily forested areas of his homeland. Each time you raise your eyes just a little above normal level, you catch the glimpse of trees swaying in the breeze or snowy peaks, nature is omnipresent in a way I’d never experienced in my native, flat, sun-scorched plain. And then suddenly it dawns on you how this seeming paradise is also perfect for a siege, with its narrow access roads easily blocked off, and the mountains the perfect location from where to bomb the city. No wonder then that a siege did ultimately come to pass, imprinted on all that footage I’d seen with unbelieving eyes, and lasted 1425 days, from April 1992 to February 1996. A period in which I’d gotten disenchanted with my Barbie doll, learned English and some Italian and once donated ’humanitarian aid’, a pretty pencil case and a stuffed toy to ’a Yugoslav child’, in an acknowledgement that some people were worse off than we were in post-Communist Romania.

It’s highly unlikely that my pencil case reached Sarajevo, where instead of going through the normal phases of growing up, children were eating dried biscuits left over from the Vietnam war and dodged bullets, the traces of which are still visible on buildings and on the pavement, where the soles of your feet will soon learn how to recognize their distinctive shape, with a sinister lacework around their edges. Yet Sarajevo lasted for all those 1425 days and beyond, rebuilt its bridges and damaged buildings, returned to its markets, cafés, mosques and churches, to its comforting sounds of heated but friendly conversations, coppersmiths working away, coffee spoons striking the edges of cups, Muslim calls to prayer and church bells tolling at noon, Czech-made Tatra trams rattling away by the decidedly dubiously coloured Miljacka river and songs bursting from radios, computers and people (Sarajevans sing a lot in the most mundane circumstances), Slavic longing and Turkish lovesickness meeting in them like long lost friends. 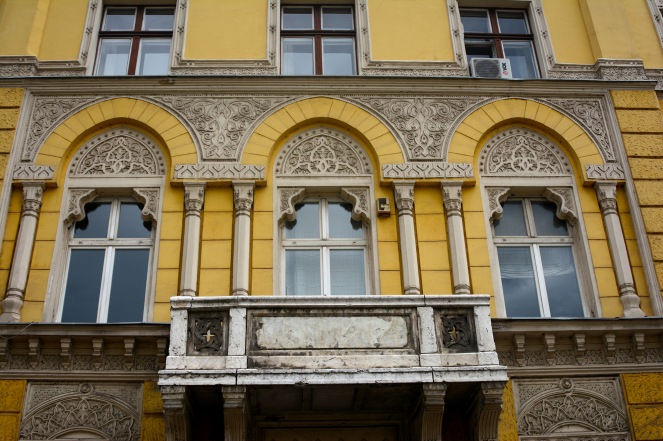 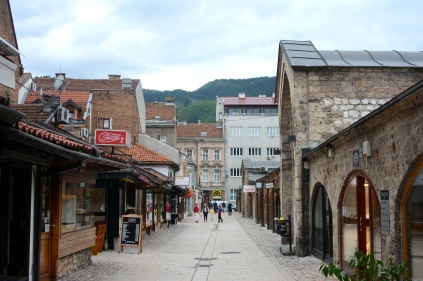 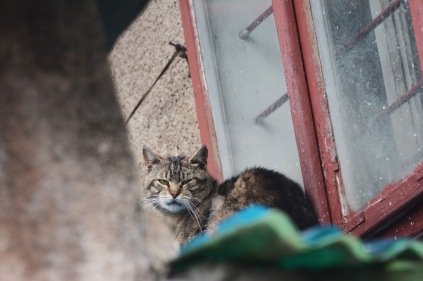 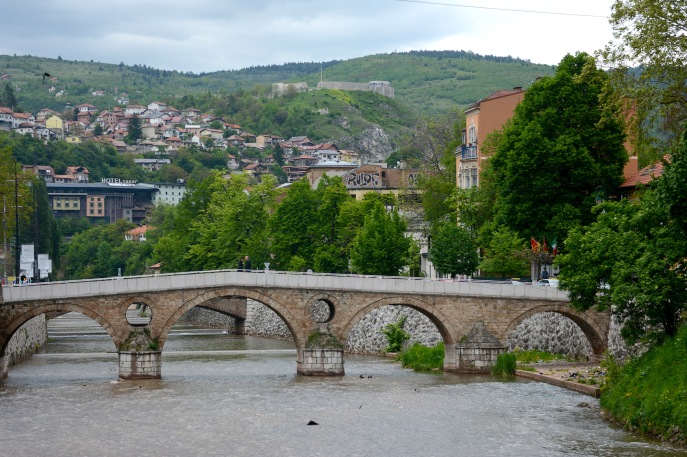 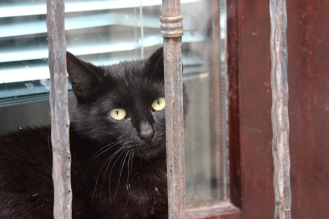 And it’s not just the way Sarajevo sounds- there is also a particular scent to Sarajevo, its crisp mountain air inhabited by two fundamental types of smoke. That of cigarettes, the kind of unshackled carefree smoking as a way of life that has been lost elsewhere but was fashionable more than three decades ago, incidentally during the heyday of the Yugoslav-Sarajevo utopia, and that of meat being grilled, the charcoal mixing with the dripping grease and a faint hint of metal. I now realize this is probably hell for vegan clean living hipsters, and I love Sarajevo the more for it, although strangely for its hardline timelessness, there seem to be very many ads for yoga classes around town. I cannot help but picture them as people seated in the lotus position (or what the Hungarians call ‘Turkish sitting’), with a cigarette hanging carelessly from the side of their mouth, a džezva in one hand and a filigree cup in the other, and they slowly, calmly, relentlessly move one towards the other until they are close enough for the coffee to be poured. The earthy, almost bitter smell of coffee is of course a part of the scent of Sarajevo too, and so is the prevalence of a possibly patchouli based cologne which I remember as being the way my grandfather smelled when he had to attend festive occasions, such as weddings, funerals or church services my grandmother pestered him into.

Then there is the way Sarajevo moves, let’s politely call it a measured way, in all honesty it’s of course slow. People in Sarajevo have time, you may say they have earned that time, but reality is often bleaker: unemployment is so high that many people seemingly merrily idling the day away in coffee shops and on restaurant terraces are actually jobless, in between jobs, looking for something that never materializes or on their way to, or from, some Western European dreamland with the aftertaste of a nightmare. The way Sarajevo moves also betrays these gaps in its fabric, the people who left, as Gastarbeiters from the still relatively prosperous Yugoslavia, as refugees during the war, as ‘economic migrants’ ever since. The Bosnian diaspora spans all over the world, tellingly the two most advertised writers in bookstores are Aleksandar Hemon, writing in English, and Saša Stanišić, writing in German but always, incessantly, obsessively, about Bosnia. Everything from biscuits to phones is hawked with the smiling faces of the football team’s best known stars, such as Miralem Pjanić or Edin Džeko, but you’ll see an awful lot of Ibrahimović shirts too, a sudden love of LA Galaxy having sprung in the heart of the Balkans.

To make up for the lack of actual jobs, the mind-bogglingly convoluted bureaucratic system devised to make Bosnia and Herzegovina (un)functional seemingly hires at least three people for each actual task, in a hark back to the glorious days of Communism. Trying to understand the way the country works is no mean feat- a federation, hence its division into optimistically Swiss-sounding cantons, it’s not actually made up of Bosnia and Herzegovina, as its name would suggest, but of Bosnia and Herzegovina AND the Republika Srpska, the Serbian entity with a decidedly different agenda, frequently hoping to secede, and/or join Serbia proper, but at least make Bosnia as it is unviable. There are national quotas in place, based on obsolete census numbers, so I must assume that the six cashiers sadly peering into their crosswords in the almost deserted railway station were two Bosnians, two Croats and two Serbs. The number of people trying to buy tickets amounted to a grand total of zero, if we disregarded the three Middle Eastern gentlemen attempting to go to Banja Luka and then being brutally rebuked by all cashiers on hand.

While the infrastructure might be patchy at best, most Sarajevans still live in the state of innocence when tourists bring you joy: their English is generally passable, and they often inquire whether you like their city, beaming at a positive answer. Most tourists, in a scary development for those who feared Islamisation after the fall of Yugoslavia, do come from Turkey and Arabic countries, and money is also being visibly pumped into Bosnia from these sources, but the catastrophic visions of throngs of fully veiled women on the streets of Sarajevo are greatly exaggerated. This city is used to history happening in its very heart, such as WWI starting on an unassuming street corner by the Latin bridge and has a certain wisdom that can be acquired only through suffering. As we approached the Bijela Tabija, a rather ramshackle affair which nevertheless has a stunning view, we assumed it to be closed only to be waved closer by its guard, who had just let in the other two tourists visiting it on the day, incidentally from the same Budapest flight we’d taken. The view, as almost everything in this city, was both breathtaking and devastating, the fog rolling in from the mountains meeting the cemeteries strewn all over the city, so many of their monuments made from pristine white marble, with dates of death clustered between 1992 and 1995. In just an instant, Sarajevo lifts your heart, then breaks your heart, and as such you can never forget it. 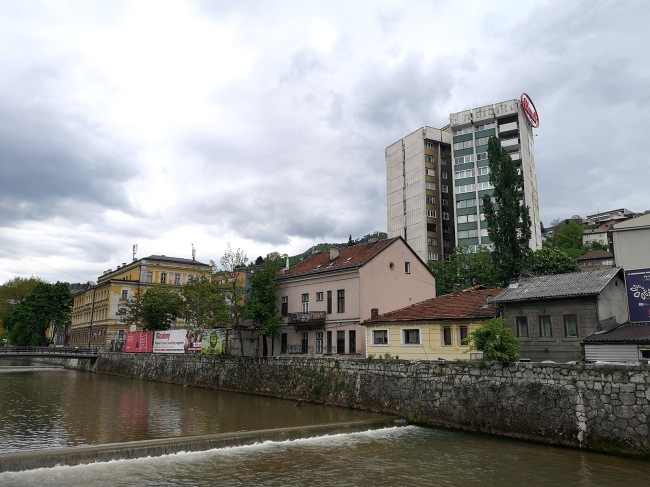 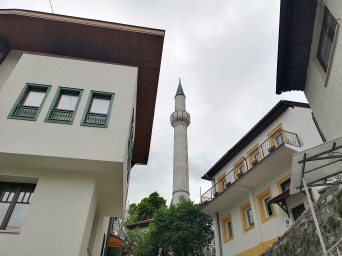 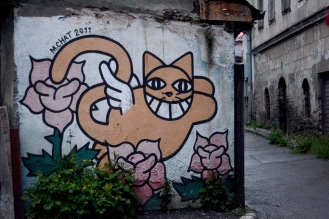 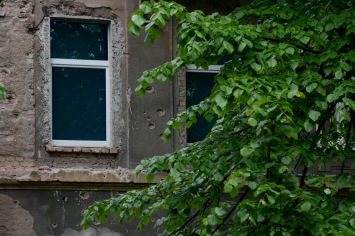 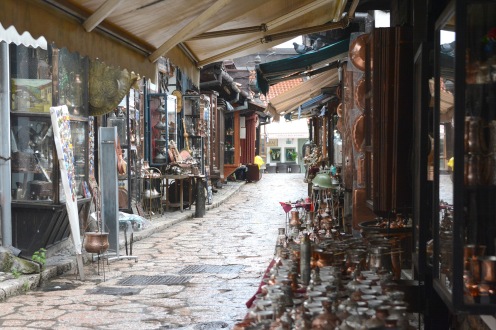 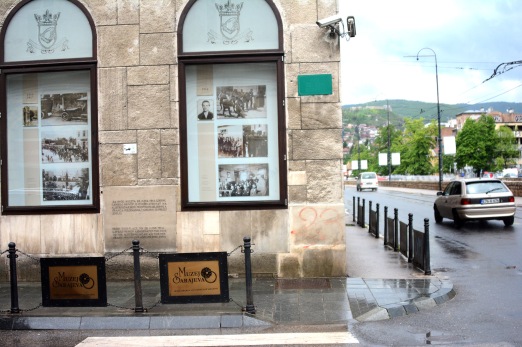 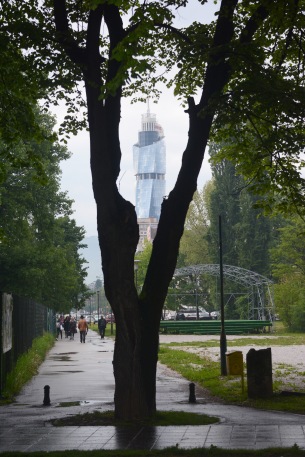 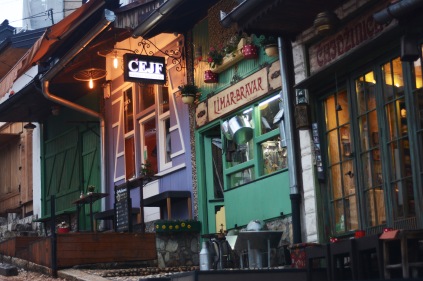