For the final stretch of our trip we decided to hop south of Izmir, an adventure which also included one intense hour in the centre of Izmir itself, naturally stuck in traffic, through which we learned that keeping your eyes peeled for the highway is an absolute must if you want to avoid the hot mess of people on six lane roads turning both left and right at the same time amidst much cursing and frantic activity by peddlers who wish to sell you everything from napkins to frying pans.

The final goal of our journey was to be found on the Çesme peninsula, though it was not the town of Çesme itself, situated right at the tip and facing the Greek island of Chios, but the particularly scenic looking and insta-friendly Alaçatı, which comes complete with an old centre filled with bars, restaurants and fancy accommodation and a beach blessed with tantalizingly translucent blue waters. Like most settlements in the area, it also looks back on a considerable Greek past, with the population shifting to mainly Turkish in the first half of the 20th Century. Theories on its name vary, one connecting it to the Greek word alas, salt, another to the Turkish alaca at, red horse. This led me to construct a mental image of handsome locals carrying salt on ginger horses, perhaps while taking a break from some early form of surfing, as the old port, now hardly in use since most traffic is headed to Izmir, is blessed with winds and waves which make it a favoured spot for the lovers of the sport.

As opposed to the Northern Aegean, which was frequented principally by domestic travelers and the odd foreigner with exploratory tendencies, Alaçatı is a classical tourist magnet, with all the up and downsides of the phenomenon. A documentary seems to have made it extremely popular in Japan, and it is also among the most hashtagged Turkish locations on Instagram, usually with material that includes bougainvillea, whitewashed buildings and blue furniture. The old town is actually quite small, centred around Kemalpașa street and a few alleys going north and south of it. The architectural setup is similar to that of Ayvalık, with Greek and Ottoman houses mingling liberally, and a general fondness for shades of peach, lilac, pink and blue. It does however feel more museum like, with most houses being turned into hotels and pensions, restaurant terraces meeting each other in a continuous flow and souvenir shops filling in any space that is left.

The few locals one sees are probably employed in one of the before mentioned establishments, with visitors idling away on terraces in studied clothing, teetering dangerously on the edge between elegant and flashy, eager to be seen. If this sounds like somewhat harsh judgement, I will cut the slack for the entire town, as learnt form the Bible, for the one wonderfully dressed older lady seen on a café terrace, taking tiny sips of her coffee and tiny bits of her Turkish delight while totally immersed in her reading. Speaking of what is to be eaten and drunk in Alaçatı, the area, alongside Çesme and Chios in neighbouring Greece is famous for its mastic, the resin of the mastic tree, which is used to flavour coffee, sweets, ice creams, puddings and the odd alcoholic drink-we’d actually discovered the ingredient in a rather lush cocktail we’d had in Corfu’s Bristol bar a few years before.

The beach is about a ten minutes’ drive away from the centre and perfectly pleasant, with silky sand, warm waters and forests of deckchairs and umbrellas occupied by tanned people in expensive looking swimsuits reading Vogue and German language crime novels. Prices are naturally steeper than further north, but still well under Greek or Italian standards, especially after the lira has plummeted this year-a bad thing per se, but also an unexpected boon for Turkish tourism which is again picking up pace after a few decidedly bad years. 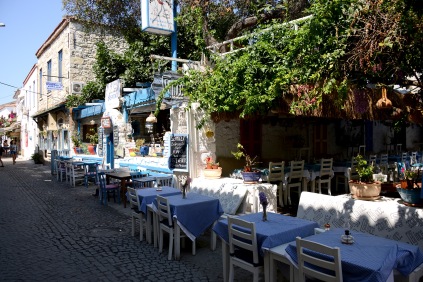 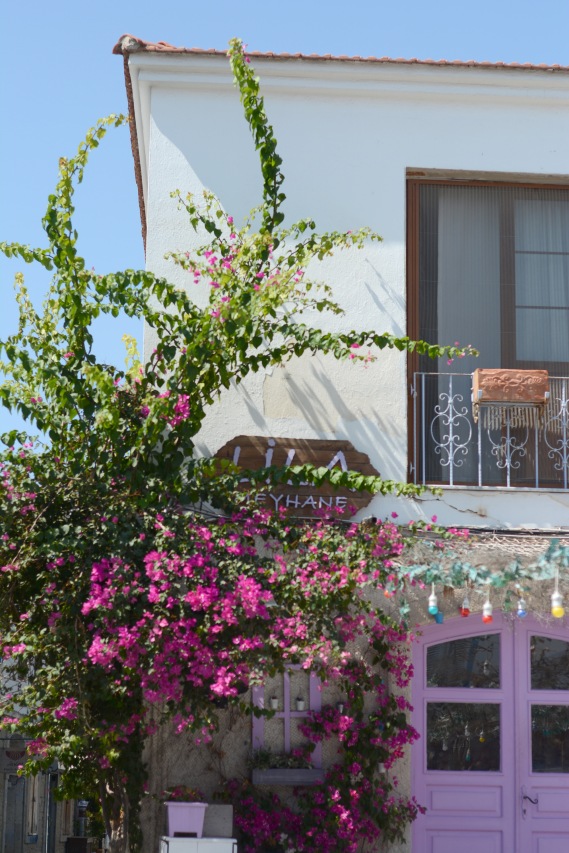 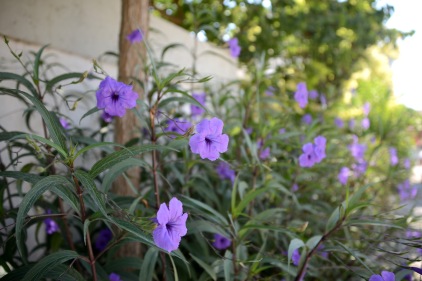 For those who might feel intimidated by Alaçatı’s poshness, there’s a rather similar lo-fi proposition right outside the previously visited Ayvalık: Alibey or Cunda island, known as Moschonisi, or the fragrant, in Greek. It is connected to the mainland by Turkey’s oldest strait bridge, confusingly also called Boğaz Köprüsü in Turkish, just like its considerably larger and most famous counterpart in Istanbul, boğaz is the generic term for strait in Turkish, with the Bosphorus being the strait of straits, of course.  Back on Cunda, we find deep blue waters, olive trees, windmills and a touristy hub on the island’s southwestern tip, with an assortment of bars and restaurants, many of them lined along the shore, facing the neighbouring Pinar island. Both islands are part of the Ayvalık archipelago, mostly made up of smaller uninhabited islands which form the itinerary of some rather intriguing novelty cruises which involve people jumping around to Turkish pop and military evergreens. (And you read that right.)

Compared to the overflowing beaches south of Ayvalık, Cunda has a sleepy, rural feel, with parched Mediterranean vegetation punctuated by palm trees swaying in the balmy breeze, remnants of Greek architecture dotting the landscape and smaller beaches tucked away from the main road, often flanked by averagely priced hotels. Possibly the perfect spot for a misanthrope’s holiday reading by the shore far from the madding crowd. If only those waters at Alaçatı weren’t so ridiculously postcard blue. 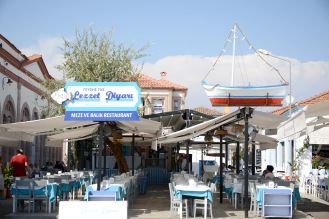 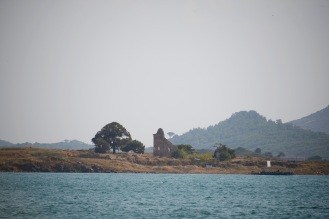 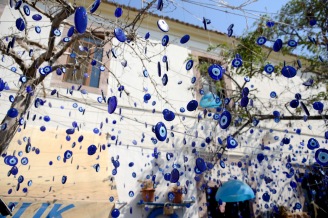 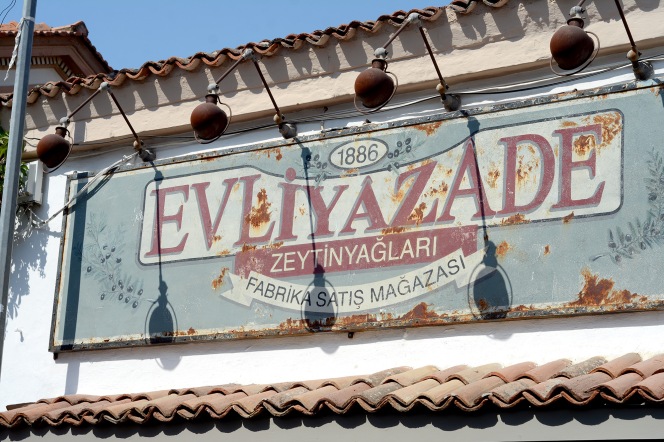 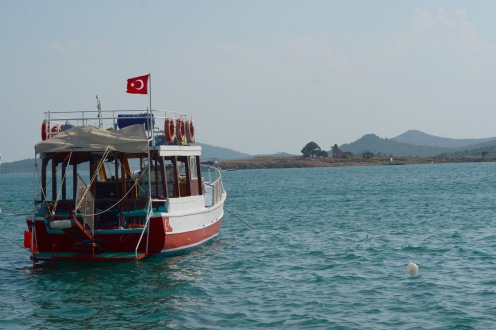 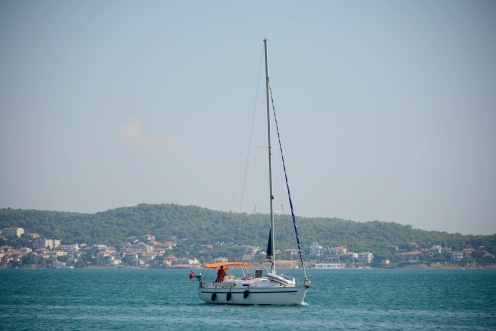