As touched upon in the installment dedicated to Ayvalık, Turkey’s Northern Aegean coast has been the scene of a flurry of major historic activity, which in turn led to some exciting ruins awaiting visitation in every second village- if you have a partner in crime, that is, but as (un)luck would have it the blog’s industrious co-photographer is decidedly lazy when it comes to his seaside holidays, a state of affairs which he blames on his manifold ailments, but actually he simply loves lying on a sunbed doing absolutely nothing. Thus my fever dreams of Agatha Christie-esque archaeological ramblings were laid to rest, and we eventually settled on sneaking in two minors stops on the road back home.

First up, something called Zeus’s Altar, a charming name which reminded me of the fact that even as a child I’ve always had tremendous sympathy for the Greek pantheon in all its camp silliness- the stern desert God of the Old and New Testaments (and also of the Koran, I do not wish to sleight any of the major monotheistic religions here) seemed too flawless, and also humourless to have created us to his likeness, whereas whatever Zeus got himself into was bound to end in catastrophe, or children. Sometimes they’re the same, of course. The altar lies about one kilometre off the Izmir-Çanakkale highway at Küçükkuyu, so the task of reaching it seemed straightforward and was met with the Jeremy Clarksonian maxim of what could possibly go wrong. Anybody remotely familiar with both Top Gear and Greek mythology will immediately understand that a great many things can go wrong. First off, the officially one kilometre road proved to be perhaps longer, but definitely meandering and bumpy, causing a sense of dizziness I tried to calm by pronouncing the ü and u in the village’s name in quick succession, which also proved harder than it seemed.

Having reached what seemed base camp, we were informed by a slightly confused fellow visitor that he assumed more summiting was to be done, and indeed, another officially 800 metres lay ahead, which at that point could have very well been a five-mile trek or a half marathon. That was however the least of our concerns, as the first clouds we had seen in about a week decided it was just about time they became ominous and storm-like over the horizon. It was a pretty horizon, though, and contained the charming little village of Adatepe, a sort of Schrödinger’s cat of settlements, both very authentic and very bought up by rich Istanbullus. Who then proceed to live in the authentic houses over the summer and scuttle back to the megalopolis- I admit to having written capital here, I always wrestle with the improbable existence of Ankara- over the cold season.

We trudged ahead relentlessly, trying to optimistically ignore the fact that the clouds had in the meantime proceeded to move over from the horizon to right above our head, where they lay in waiting for something mysterious- namely the moment in which we reached the altar, which happens to be a glorified pebble (fine, it’s actually a slab) on which Zeus is supposed to have stood to watch the battle of Troy, something akin to the Mercedes VIP area in Sziget, where only the absolutely elect are ever allowed to enter. Admittedly, the lightning show over the sea was a nice and fitting touch but running down a hill in soggy slippers is a sport not included in the Olympics for the simple reason that it would lead to an annoyingly high number of fatalities. Having narrowly escaped a dip in a muddy whirlpool we retreated to the soothing shelter of a small restaurant, whose exclusively female staff seemed oddly reminiscent both of fairy tales (mythology combined with tempests might have an intoxicating effect) and the movie Mustang, and they also catered excellent pancakes and dumplings, plus offered the entertainment of a spritely cat and a well-mannered dog. 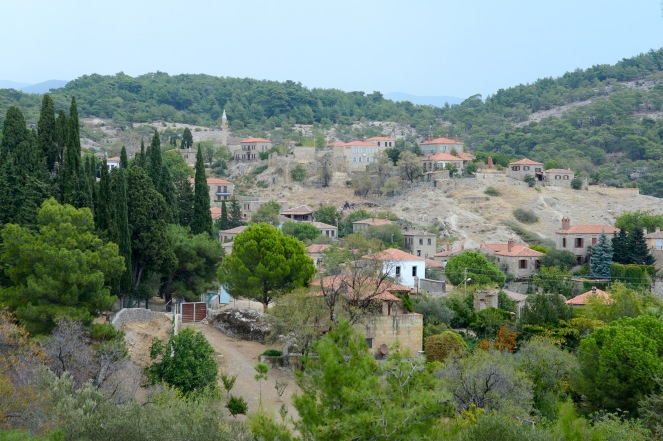 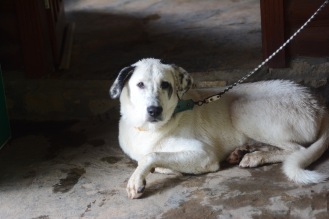 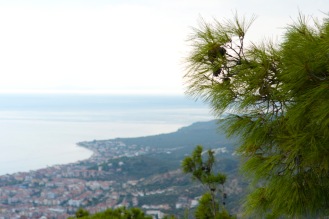 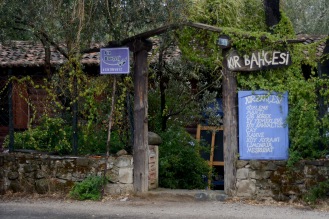 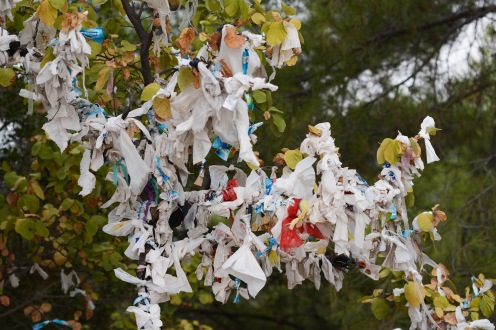 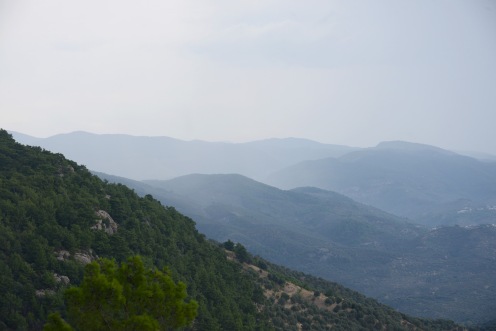 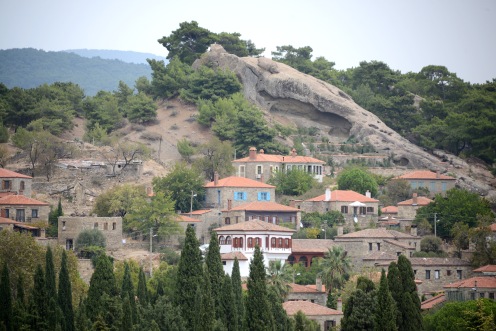 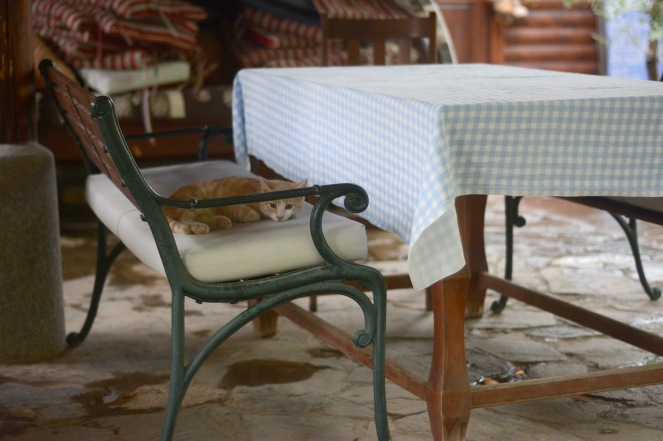 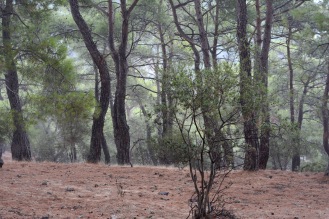 Once the rain had abated, we moved on to target two, the village of Yeşilyurt, disturbingly also about one kilometre from the highway, which even more disturbingly seemed to be an actual kilometre and not a small odyssey, though prior to finding the correct exit we had precipitously turned into a dead end which will one day become the road to the tunnel system being constructed to avoid the traffic jams caused by the narrow mountain roads that snake along the coast. Yeşilyurt is similar to Adatepe in that its traditional Ottoman atmosphere was preserved, even if a good many of the houses currently standing date back only to the first half of the 20th Century. As expected, the village has its share of boutique hotels and cozy cafés, such as Ayten Abla’s Breakfast and Mantı (dumpling) House, where we had excellent coffee and were faced with possibly the highest concentration of Atatürk pictures per square metre in the northwestern region of Turkey, which is a very respectable feat indeed given the robust competition.  It does also have genuine and slightly bewildered locals too, such as the little old lady who was slowly making her way down to her daughter’s house and welcoming everyone to her village, while also asking where they came from.

If picturesque houses were not enough, the hillside is overgrown with fabulous Mediterranean vegetation, bougainvillea, cypresses, pomegranate and olive trees, which give the air an almost surreal fragrance-the only place I can think of that smells quite this good is Corfu, and they happen to lie at the same latitude, 39° N, which I will thus decree to be the best latitude possible ever. Should you be lucky enough, your authentic cottage will come with a stunning view of the gulf of Edremit, in which case, with all due respect to Zeus’s choices, I’d rather take this vantage point over his godly boulder, though downwards traffic during a storm can be equally problematic on Yeşilyurt’s cobbled streets. Consolingly, if I were a Greek deity I’d probably have the gift of flying, which together with being allowed to make preposterous and oafish blunders for an eternity is basically the only form of existence that makes sense. 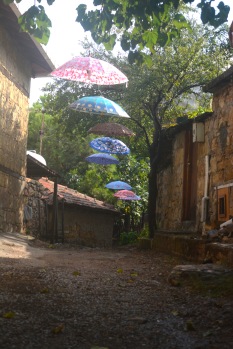 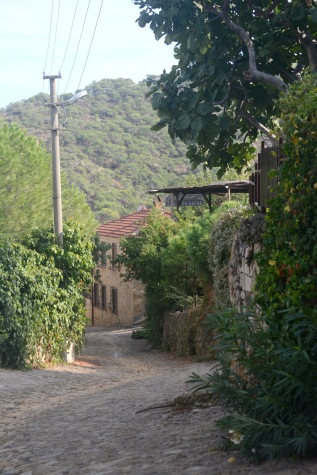 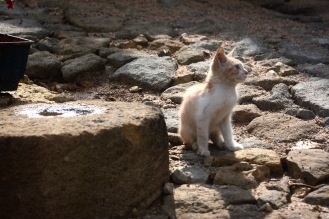