It takes special talent to go on a city walk on one of the coldest mornings of the winter, or, to highlight my gifts even more, on the only truly freezing weekend morning of the entire season. Nevertheless, I managed to embark on the adventure with little to no regrets: perhaps I could have taken more detail shots had my fingers not been frozen inside my gloves, but life is not always a Dobos cake, or an ornate arch, to go for a fitting Secessionist simile.

This walk comes somewhat as a complement to the Bauhaus one we attended on a decidedly comfier December morning, organized by the same team at Miénk a Ház, and explores the Secessionist architecture of Újlipótváros. Just as we struggled with Bauhaus, the naming of the artistic direction is a bit of a conundrum this time as well. The most widespread ones are probably Art Nouveau, after the Maison de l’Art Nouveau gallery, opened in 1895 in Paris and Secession, coined by Georg Hirth, editor and publisher of the magazine Jugend (thus in areas of German influence the style is also known as Jugendstil).

The style, characterized by a break from the official academic art of the period and heavily influenced by natural forms, particularly the curved lines of plants and flowers, had many other names for more localized versions: in Italy it was either stile floreale or Stile Liberty (after London’s Liberty & Co department store), in the US it was often called Tiffany Style due to its associations with the designs of Louis Comfort Tiffany while in the UK it was sometimes known as Glasgow Style, in connection with the Arts and Crafts movement of Charles Rennie Macintosh.

The Hungarian ‘edition’ naturally has links to its geographically closest Austrian counterpart, the Vienna Secession, and is thus most often called Szecesszió. It does, however, have a very local flavour in the strongly visible Asian inspiration of its decorative elements, a classical example of which is the building of the Arts and Crafts Museum, designed by Ödön Lechner. Lechner was the luminary of the Hungarian movement, in many ways paralleling the role Otto Wagner had in Vienna, but he was never able to set up a school which would have institutionalized local secession. The break Lechner and his followers insisted upon was with the Western European direction they felt was imposed onto Hungarian artistic expression and they sought to reach out to the nation’s ancient Asian roots, with floral and geometrical motifs similar to Persian or Turkish art.

Since Secession is more about decorative flourishes than a comprehensive architectural vision, its buildings age less gracefully compared to Bauhaus ones. Many of the houses we visited had been repainted, the lifts removed or left in a state of disrepair, while the ornate, often wooden gates (very typical manifestations of Art Nouveau/Secession, as seen in the classical designs of Victor Horta or Hector Guimard, he of Parisian metro stations) have burned down or were stolen. Such heists were apparently quite frequent for a while, and full doors lifted off Budapest buildings would be later auctioned off in exotic locations.

The jewel of the tour is undoubtedly the hallway of Visegrádi street 29, built in 1913 and designed by József Klinger. Well preserved, it is a fascinating mixture of snaking Secessionist decorations, modernist touches and bas-reliefs harking forward to the yet to be born socialist art. The lift of Tátra street 12/A is another very well-hidden gem- the building itself is neither spectacular, nor particularly Secessionist, and was designed after the peak of the movement. It however houses a tiny lift with mahogany wood panels and glass windows, which can accommodate a maximum of two people, provided they are both smaller children or Tibetan monks on hunger strike- alternatively, you ride it alone and amidst its ominous creaks you imagine the scene of a movie in which the door snaps open and Hercule Poirot concludes that il y a un mort dans la cabine.

The façade of Visegrádi street 17 prompted further forays into the existential implications of lifts, namely the fact that classical buildings would generally have very ornate decorations on the first floor, where the richest tenants lived, whereas with the advent of lifts top floors became increasingly fashionable and sought after, as the better view and better air was also backed up by ease of access. The building was designed by architect brothers József and László Vágó in a subdued but intentional nod to Wagner’s Viennese Majolikahaus, incidentally re-inspected during our most recent visit to the city. The Vágó brothers are responsible for several other Secessionist buildings in Budapest, and for many in their native Oradea, their work being paramount in turning it into the style’s most spectacular manifestation on the territory of Romania. My hometown of Arad was about to get a taste of Secession too, but Ödön Lechner’s plans for a town hall were ultimately abandoned.

The final stop of the walk was one of the Palatinus buildings lying near Margit bridge, which in turn shed light on one of my age old yet uninvestigated questions, namely that of why the bath on Margit Island is called Palatinus itself. As it turns out, the island was owned by Archduke Joseph, the Palatine of Hungary, and when the capital purchased it payment was made, among other things, in plots of land, which were later transferred to the Palatinus Építő Ltd, owned by real estate magnates Grünwald and Schiffer. Flats in their buildings (and those owned by other wealthy businessmen) were generally leased for life by the tenants, which in turn made the owners responsible for the general upkeep- when this system ceased, many buildings fell into disrepair, as the new owners of individual flats were not always concerned with maintaining the building as a whole.

Returning to our houses on Pozsonyi street, it is a bit tricky to call only these ones Palatinus buildings, but this is how they entered public consciousness in the city. In their heyday, they were provided with fascinating amenities, such as a central vacuum cleaning system (the power unit in the basement was started at given hours each week and you connected to the inlet in your flat with a hose) and thermal water straight from Margaret island- I am yet to decide which idea makes me more jealous, probably the vacuum, as I had lugging the tank of the cleaner behind me. On the other hand, a little spa in your tub isn’t to be frowned upon either. 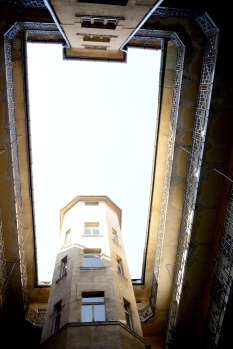 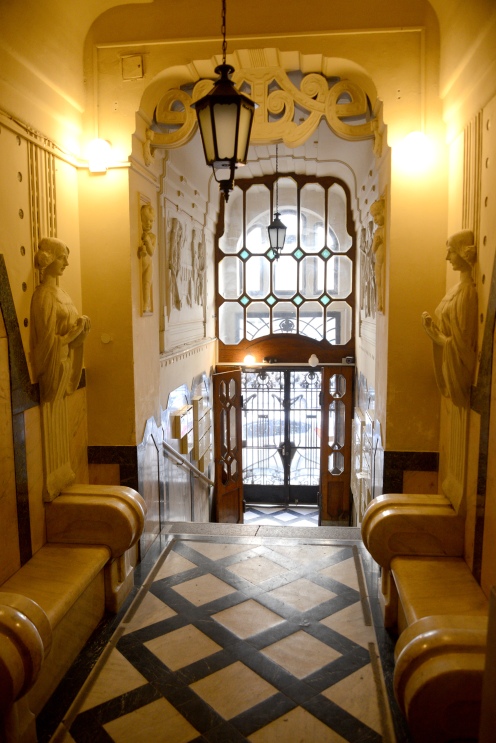 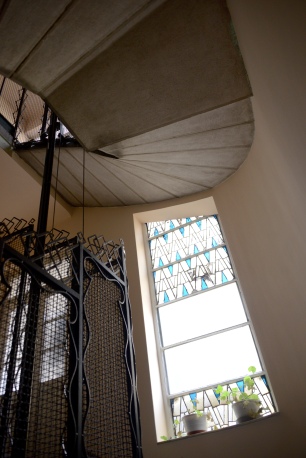 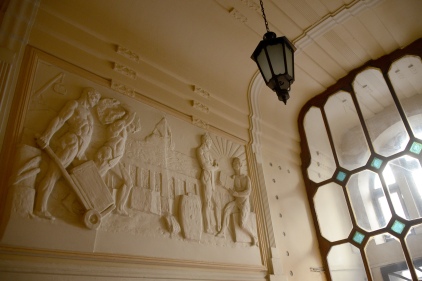 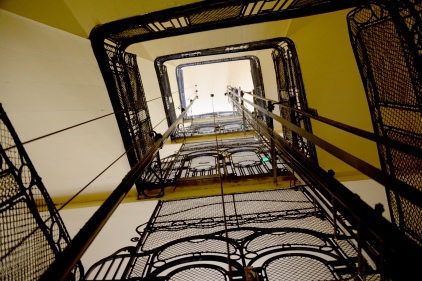 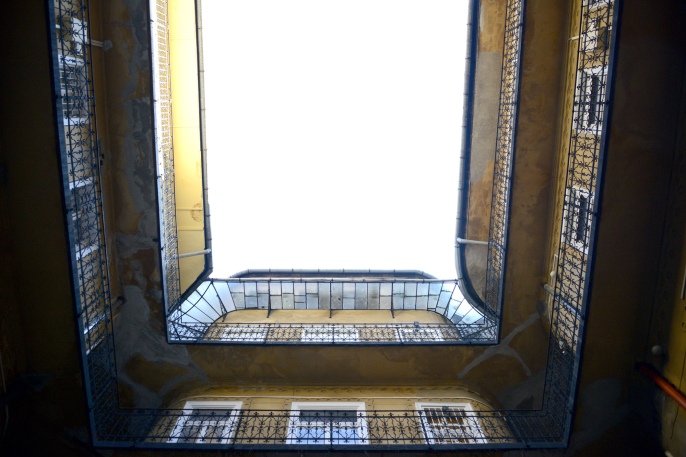 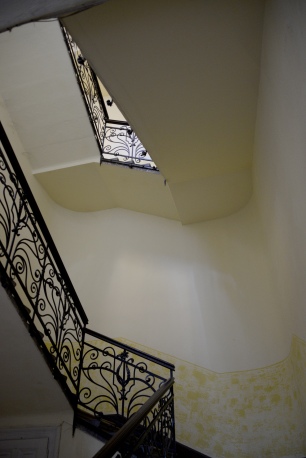 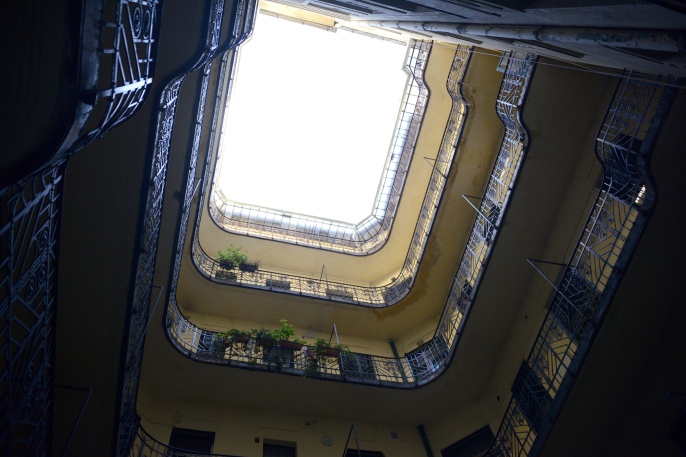 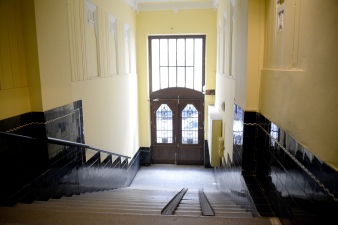 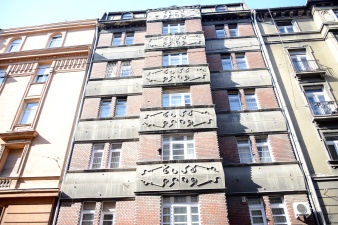