In spite of the Arctic weather, tempers have been flaring these past days and weeks in Budapest over the thorny matter of the 2024 Olympics. Budapest is still in contention and giant billboards have sprung up all over the city promoting the possible event, which is seen by some as an opportunity to highlight the charms of our majestic Eastern capital to the world. At the same time, a movement opposing the event is gaining traction- why spend money on building facilities, which, as per the example of most previous host cities, will remain unused and fall into disrepair, when the city quite obviously has many other needs which could be addressed with the funds that would go down the black Olympic hole in a flicker of short lived glory. It’s enough just to think of how this summer’s swimming world championships have already monopolized the city’s pools- if you’re not in line for Hungary’s next record breaking gold, you might as well practice your breaststroke in your tub. Provided you can afford one.

Because, after all, cities should be meant primarily for the people who live in them- and if they feel good, it will rub off on any tourist who might consider visiting, and then more people will visit, because it feels good to be there, among people who are satisfied with the city’s transportation, services and infrastructure. People who might even enjoy their commute, and occasionally merrily glimpse upon the clock on Moszkva square to check out whether all goes according to plan. Only, wait a minute (if you can measure it), it’s not called Moszkva anymore, because why keep a beloved historical name when you deem it to sound vaguely Communist- though, given president Putin’s impending state visit, perhaps it’s time to reconsider.

But even if you reconsidered, you’re still in trouble. The clock is not there. For it has been replaced with the statue of a clock. The defeat of the concept of a clock. A stone monument to the fact that the human spirit sometimes freezes in ineptitude. Mercifully, though, others won’t give up on you even if you are criminally silly. Thus the square has its clocks back, not one, but many, ranging from trustworthy IKEA pieces to handmade items. Perhaps to those who cross Szél Kálmán square every morning time has stood still, but for us crossing Moszkva there’s hope that brighter days do lie ahead. 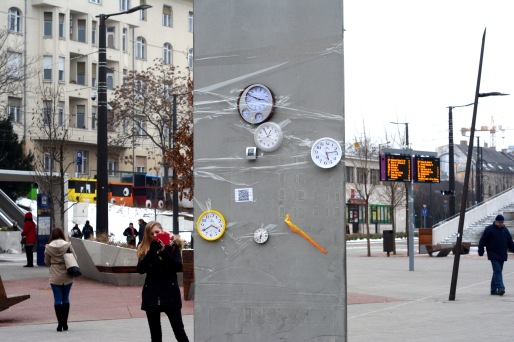 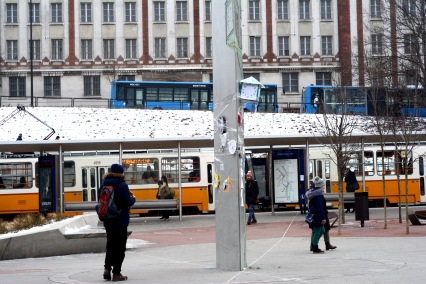