December is neatly divided into two phases, which follow each other abruptly and without any form of transition. Phase one is the oh Christmas is still ages away, I will take my time and enjoy this bit, when you cheerily look at a shop window or two and passingly check out a Christmas market with the corner of your eye. But then suddenly you realize the 24th is happening, like, tomorrow and you rush into the first shopping mall and purchase the first object you can recognize as such. This is how people end up with designer cheese graters, dozens of identical earrings and yup, socks.

The phases will follow in this invariable order no matter how much you plan ahead or fight against the tide. There is something Biblical but perhaps not so holy in the way Christmas shopping seems to spiral out of control, like fish and wine that never run out. The only true end to it is Christmas day, when you simply surrender on all the things you should have bought, but didn’t, and actually it turns out it’s fine, they were not really necessary at all. Which should also mean that next year you’ll be calmer and wiser about it, but the only wise men in this story are those who brought gifts to Baby Jesus, and they are only wise because they had to bother about only one item each.

Christmas markets were originally thought up to ease this shopping conundrum, which in old days was still an almost reasonable buying conundrum. Even those with modest means had to do some seasonal catering, which might have been only food and warmer clothes, but having it all in one place in the weeks leading up to the holiday seemed like the logical thing to do.

Logic is all but gone from today’s iterations of the Christmas market, since you can find most of the items on display in other stores and on the Internet, often for about half the price. Their sense is then probably given by the fact that they are the only things which can convince you to spend any considerable time outside on icy winter nights. Some twinkling lights and the scent of nutmeg wafting from my mulled wine and suddenly my toes are not freezing. Actually, they are still freezing, I just pretend they aren’t not to ruin the holiday cheer but that’s one step ahead already.

We have thus yet again engaged in super scientific studies, and here comes the verdict on the Budapest markets we’ve visited.

– Vörösmarty square is a good idea in theory, and was a good idea in practice too about five to ten years ago, when the Budapest Christmas market madness was still in its infancy. These days it may be a good idea for half an hour right after the shops open, but then there are no lights. Come evening, it’s so crowded you can hardly shuffle between the stands, the mulled wine is over expensive and not particularly tasty, sausages are greasy and cost an arm and a leg.

-You therefore make your escape onto Fashion street, but the name is ill-boding already. The crowd, stands and prices are actually the same, but as you look up to the skies and ask for the mercy of an unforgiving God, you see some garish twinkling shoes and shopping bags and run further. Deák square is up next, with what seems as the low cost version of the previous two markets, set up for the entertainment of people waiting to switch buses and trams. The idea is somehow welcome but the wine is still sub par, so you give one horrified look to the giant Advent wreath and head on towards Saint Stephen’s. 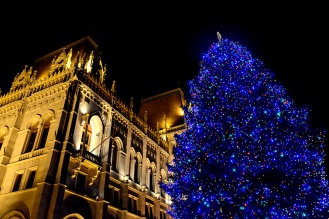 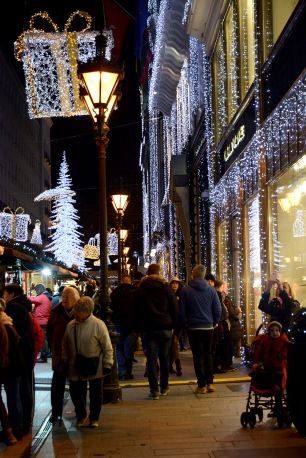 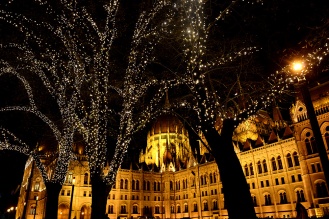 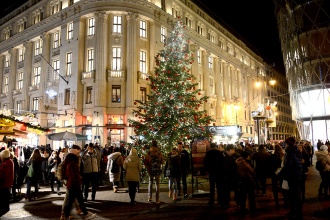 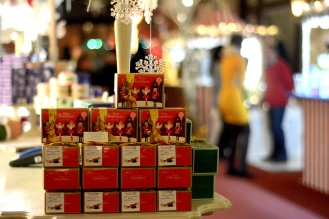 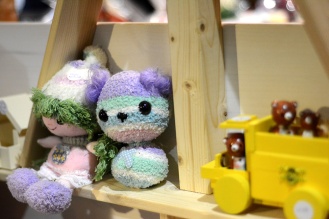 -With a sigh of relief you realize that not all is lost. The sheer size and diversity of stands of the Saint Stephen’s market makes it more navigable irrespective of the time of day (though Saturday evening is still pretty bad, but you basically have yourself to blame for going then instead of say, be drinking in a pub watching the Premiership). There are plenty of places with good hot drinks- having hot Becherovka is always a plus, and the Divino stands offer several enjoyable versions of mulled wine. The souvenir/trinket shops are also quite carefully selected and fairly priced, so you may even be victorious in your quest for gifts. There’s a skating rink too, and the Basilica of course provides a pretty spectacular backdrop, best enjoyed if the market is approached from the Danube side.

-Since you are there, you might as well check out the indoor extravaganza in the Gresham Palace, which looks like something from an American Christmas feel good flick, so much so that the first image coming to my mind was of Donald Trump showing Kevin McCallister the way in Home Alone. Besides being unsettled by the previous vision, there’s not much else to be done in case you’re not in the mood for buying expensive fur. You may spend an enjoyable five minutes investigating the architecture and the glitter covered reindeer at the door, and off into the cold night with you.

-Here you might consider crossing the bridge to Buda in spite of the cold Danube breeze, and you will be rewarded with the pleasant little market in Várkert bazár. It’s not really popular for the time being, which is both wrong and right- it has but a few carefully chosen stands, yet at the time we visited it was almost deserted. Which came as a wonderful relief, yet in the long run it’s questionable whether the organizers will find it worth the effort.

-In case the wind still sounds scary, from Saint Stephen’s you can head to the Opera, where you’ll find the now traditional opera themed market- though market might actually be an overstatement, they have a pretty handsome tree, a couple of thematic stands and you can enjoy a hot drink on the terrace of the adjacent cafe, which, come to think of it, is not too bad after all. Should you feel the imperative need to buy something, there’s a row of stands on the Oktogon facing end of Jókai street– the trinkets on sale are similar to all other locations, but it’s a bit breezier since there’s not much else on offer.

-For the real find of this season’s Christmas markets, though, you’ll have to go a bit off the beaten track for most and take the Szentendre HÉV to the Szentlélek square market. Once you’re done with the BKK ride, it’s easy enough to locate: you just follow the lights. The organizers used the square and the adjacent streets very smartly, filling them with twinkling decorations and thus coming closest to a real winter wonderland feel- when we were there we even spotted a few snowflakes and it was bitterly cold too for extra feels. While on a Sunday evening it did get somewhat crowded, with a decidedly more locals, less tourists set up, it was still thoroughly enjoyable with the backdrop of some live Christmas carols-also, the mulled wine is both cheaper and better than at most central markets.

PS: We’ve obviously done some Christmas Tram spotting too- this year BKK has unleashed it on several lines, according to a pretty convoluted schedule which you can find on their website. During the week it’s mostly on the line of the 2, and it switches lines over the weekend, which also includes the Fridays. The best way to spot it though is by finding a frozen photographer with a tripod staunchly parked in the middle of traffic with a resolute ‘my life for a long exposure’ look on their faces. (Although we do have a long-ish exposure too, rest assured no photographers were harmed in the making of this material.) 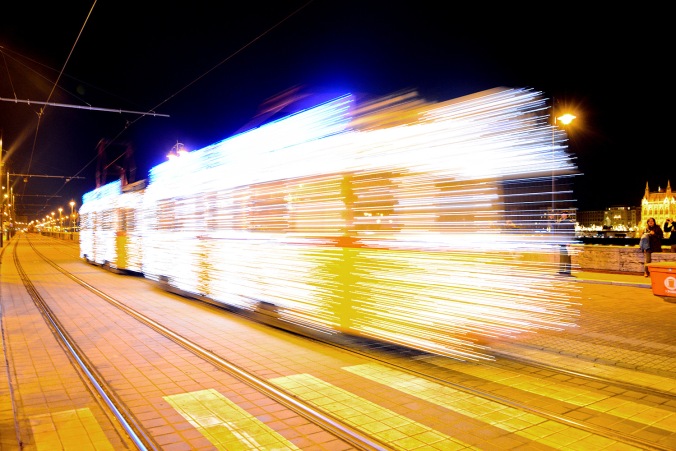 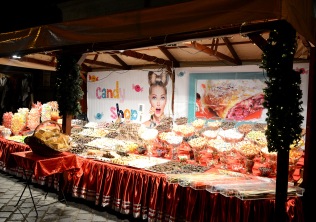 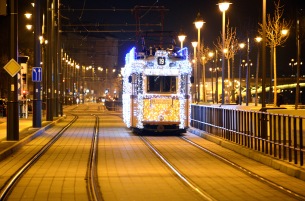 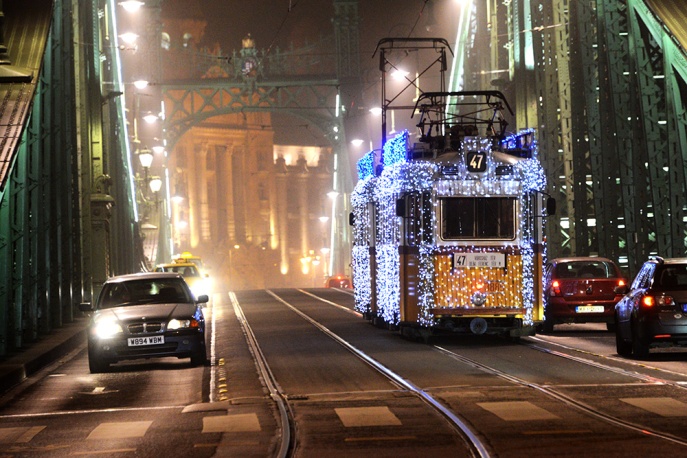 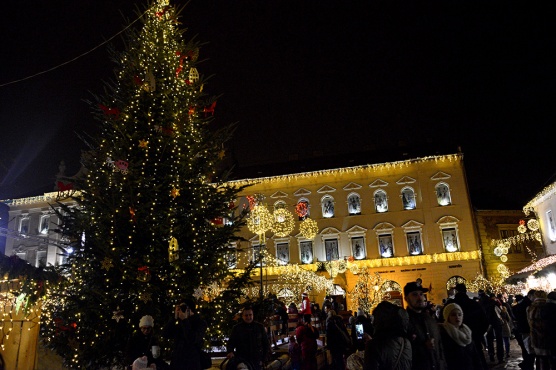 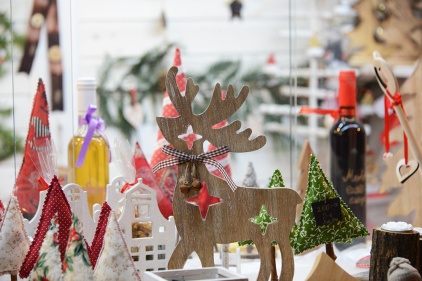 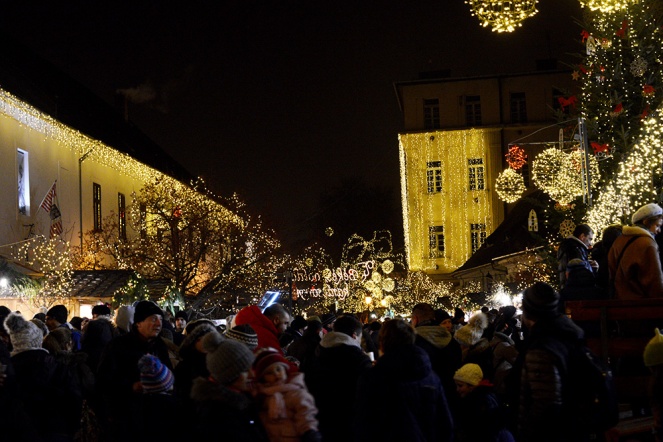 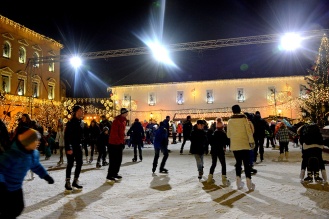