The boat shimmers in the distance, neon reflections over the Danube on an eerily balmy October evening. I always feel a thrill when I get off the tram at Petőfi Híd, Budai hídfő- the name itself has become synonymous with intimations of happiness, hours of respite from the madness of our world, swaying on the waves of the river, swimming in an ocean of sound. But today is a surprise, as we lower ourselves into the stomach of the vessel, we are greeted by rows of chairs. Although the gig is sold out, and we’re close to eight o’clock, people sit somewhat tentatively on their seats and there are many empty spots in front. There’s a stunned uncertainty on many faces as hands hold on to glasses of craft beer or rosé. Chairs, on A38. And all we see on stage is another chair, a microphone stand, and a lute lying silent in its case. A bit reminiscent, of course, of a vampire in its coffin.

The vampires in Jim Jarmusch’s Only Lovers Left Alive don’t really do coffins, though. They’re more into alternative ways of obtaining blood, going to underground clubs and reminiscing about how Christopher Marlowe WAS, moreover until very recently, William Shakespeare. And they do all this to one of the most perfect soundtracks of all time, and we’re sitting on these chairs waiting for Dutchman Josef Van Wissem to play this soundtrack. All by himself, on the one chair, with the lute.

The lights are dimmed, and Van Wissem walks out, tall, slender, impeccably dressed, with dark hair falling across his face. He looks as if he’s walked out of the film itself, until the first chord is played, that is, when it becomes clear that he’s just walked INTO the film, and so have we. These are not chairs anymore, the boat is not the boat, but a big, clunky American car prowling the deserted streets of Detroit after dark. The air is heavy with the heady spices of Tangiers, heavy with the longing of being somewhere but also thirsting to be somewhere, sometime else. For most of the set, Van Wissem acknowledges the audience, at most, with the hint of a polite nod in between songs, as if wary himself of breaking the fragile magic of the world he has created. With the one lute, pardon me if I dwell on that, but it seems a form of sorcery. Just one instrument, one man, humbly creating a universe.

In a time when we want everything to be bigger, faster, shinier, the monastic presence of this dark, lonesome pilgrim feels like a revelation. Beauty, frail and elusive, exists beyond the limitations of our mundane existence, and sometimes finds tiny cracks to flow through. My mother once sternly asked me why I’m so fond of a movie about vampires (she is no fan of niche genres, to put it mildly) and I tried to explain to her that Only Lovers Left Alive is not a vampire movie, even though its main characters are, indeed, vampires. Instead, it’s an equally whimsical and serious meditation on the meaning of life itself and the reasons that keep us going amid its seeming absurdity. And it would not have succeeded at its goal without its glorious soundtrack, written by Van Wissem in collaboration with Jarmusch himself.

As the evening goes on, Van Wissem turns towards the public more, shifts the microphone closer and begins to sing, as if stepping out of the deep concentration that has brought his musical creature into existence. It is now here, among us, a fully formed thing. And when he says his farewells to the public, which has just returned somewhat groggily to the reality of their chairs, the lute no longer lies like a vampire in its coffin. We now know that the lute is alive. 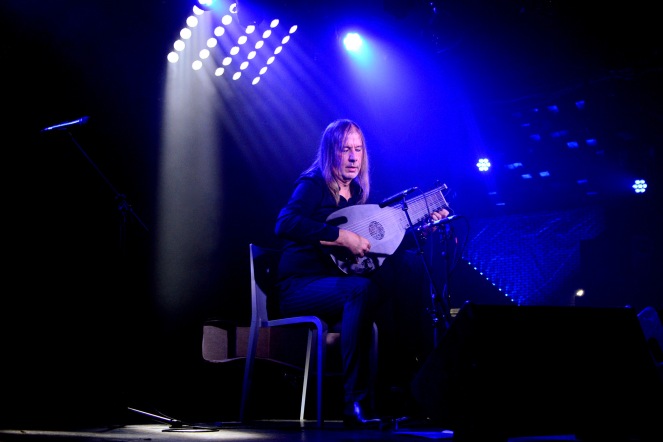 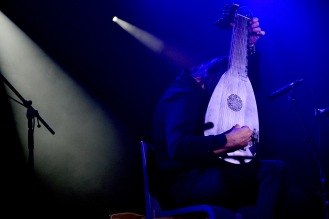 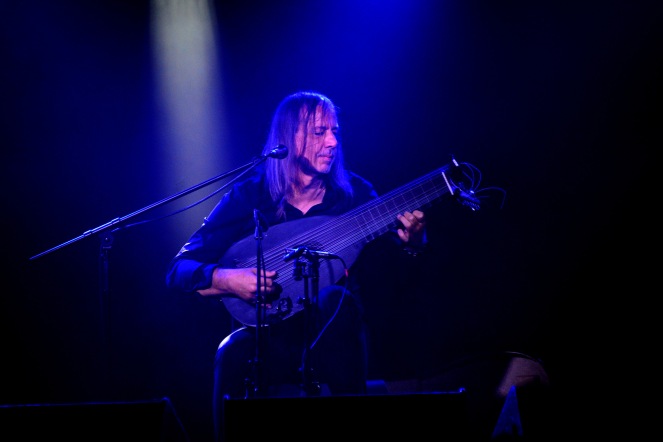