Mount Velež oversees Mostar from a height of 1969 metres, bearing the name of Veles, the Slavic god of many things: earth, waters, underworld, and deceit. Veles is the trickster god. For those more familiar with Norse mythology, or its Marvel corruption, Veles is Loki. Yet the one thing Veles could not achieve is protect Mostar, and its fabled bridge, from the descendants of those who’d built it in the first place. In 1557, Suleyman the Magnificent commissioned a bridge to replace the wooden structure which was tentatively spanning over the impossibly turquoise waters of the Neretva, one of the few major rivers of the Balkans which eschews the temptations of the Danube basin, and flows towards the Adriatic instead.

Its architect was Mimar Hayruddin, student of perhaps the most famous of all Ottoman architects, Mimar Sinan, himself the father of another fabled bridge, the Mehmed Paša Sokolović bridge of Višegrad, featured in the novel which brought Bosnian born Ivo Andrić the Nobel prize, The Bridge on the Drina. (For those interested in further literary forays around the same topic, Turkish writer Elif Şafak fictionalized Mimar Sinan’s life in The Architect’s Apprentice.) At the time of its completion, it may have been one of the widest man made arches in the world and it stood proud for almost half a millennium, until it was destroyed in November 1993 by Croatian forces under the command of Slobodan Praljak, he of the dubious fame of having killed himself with cyanide in a courtroom in The Hague.

The current iteration is thus a faithful copy of the initial one, rebuilt from a variety of international funds by a Turkish company, with some of the original stones having been salvaged from the river by Hungarian divers- Bosnia’s old rulers seem driven by a kind of loving nostalgia tinted with regret when it comes to rescuing the country fundamentally from itself. The bridge is the pulsating heart of an otherwise rather non-descript Herzegovinian town: the road from the train station becomes ever more crowded as you approach the old centre, culminating in the closest Bosnia and Herzegovina can get to a tourist apocalypse, with hordes of selfie stick wielding barbarians disturbing the slumber of a shabby mutt who seems teleported from older, quieter times, a mostar (bridge keeper) himself, ill at ease with the irrationality of human beings crossing the bridge only to come back ten minutes later. Yet in spite of the tacky stalls and locals dispensing greetings in Mandarin, Turkish and German, there is a timelessness and a purity to Mostar which many tourist loved places have lost. Watching the bridge’s slender arc from the riverbank is like watching a postcard perfect illusion, with improbably blue water, improbably green vegetation, the spritely rumble of the Radobolja rushing into the Neretva and the ebbing and flowing rhythms of a language the locals will occasionally call naš jezik, our language, to avoid the linguistic, nationalistic and religious hell calling it by any other name might cause. (The definition of the ‘our’ remains, of course, politely open to interpretation.) 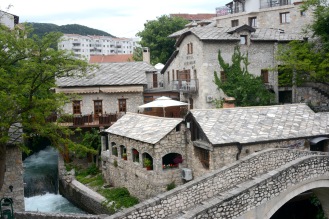 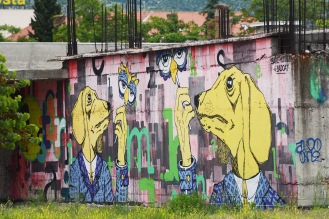 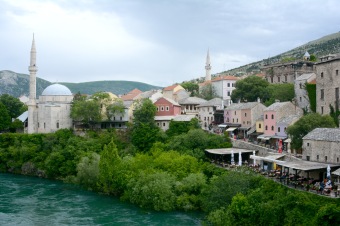 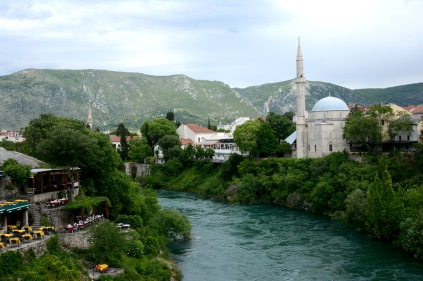 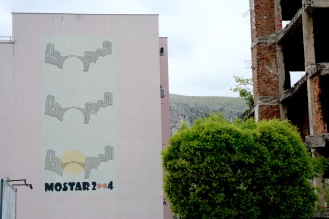 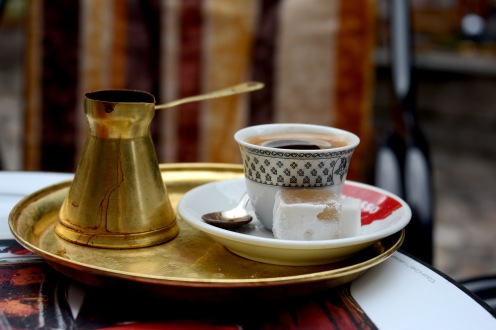 Reaching Mostar from Sarajevo is already something akin to Bilbo Baggins going on an adventure. Having eschewed the scary option of a bus (my fundamental tenet while travelling is that I do not trust any drivers in countries with particularly meandering roads), we discovered that the sleeping beauty that is Sarajevo railway station does have two daily connections to Mostar, one leaving at 7:15 in the morning, and the other one at 16:49 in the afternoon. For those on a day trip, like us, the return train departs at 17:05, which gives one a seven hour window perfect for a leisurely visit. Theoretically, tickets should be bought ahead, as interest in the services of the Bosnian railway company seems to be paroxysmal based on their promotional posters, yet in practice at 7 AM the Sarajevo station contained us, three Chinese tourists, four disgruntled ticket inspectors and an army of six cashiers, bored witless by their tragic fate, plus the compulsory pugnacious toilet lady.

The trip lasts two hours, yet here we enter the realm of the theoretical again (also known as BMT, Balkan Maybe Time), for in practice it will almost invariably extend to two and a half. The sights that come with a 12 convertible mark ticket (plus two marks for the carefully handwritten seat reservation) are however of the category that Mastercard cannot buy either. The narrow rails sneak through scenic mountains, with the still irrationally turquoise Neretva on one side and snowy mountains peaks on the other, lengthy tunnels in the darkness of which you hold your breath, thinking how perfect they would be for an Agatha Christie style murder mystery. And then they were nine minus the English tourist who disappeared while looking for the perfect Instagram angle in the last, deserted carriage but later turned out to be a wealthy baroness whose family loathed her for donating their inheritance to a yoga retreat. Returning to reality: do make sure to sit on the left hand side on the trip from Sarajevo to Mostar and on the right hand side on the trip back to enjoy the best views- while compulsory, seat reservations are mostly symbolic, and people tend to sit on whichever seat wins their fancy first.

Besides THE bridge, there is another, smaller structure in its proximity, a sort of mini me of the Stari Most spanning the Radobolja creek: the Kriva ćuprija (alternatively translated as either crooked or sloped bridge) was built right before its larger counterpart as a sort of final test, and while it survived the war mostly intact, it was destroyed by flooding in 2000 but was rebuilt soon after. This area is packed with hotels and restaurants (still wondering why would anyone call a guest house Cactus if it’s not in the desert), and while prices are generally higher than Sarajevo, about 60 euros per night should land you a very pleasant double room right in the most scenic part of town. For those irrationally excited about taking in any historical sight of some interest in a town, Mostar offers some moderate entertainment such as a hammam museum (I myself was however devastated to find out it is not an actually functioning bath), a Franciscan monastery, several well preserved Ottoman residences such as the Kajtaz house, the Koski Mehmed Pasha mosque, the minaret of which offers a great view of the bridge, all located close the old town and, further afield, the Mostar Gymnasium hosted by a mock-Moorish Austro-Hungarian building reminiscent of Sarajevo’s Vijećnica. Those staying more than a day can also venture to visit the very Yugoslav affair of a partisan cemetery on Bijeli Breg, which comes complete with a somewhat subdued Socialist style war memorial.

Much more exciting is the presence of Velež Mostar, a real gem of a football club for those looking for the unadulterated, grassroots essence of the sport. Formed in 1922 as the Radnički Športski Klub (Workers Sport Club), its heyday was in the 80s, when they twice triumphed in the Yugoslav Cup. Their most famous player was Vahid Halilhodžić, who subsequently went on to play for PSG before it was cool, but still morally acceptable to do so. Currently the manager of Nantes, he is also known for qualifying a colourful bunch of minions to the World Cup only to get sacked right before the tournaments themselves (he did participate with Algeria in 2014 though, getting them though to the last 16).  Forced to move out of their traditional stadium due to the territorial divisions which followed the war, Velež nevertheless chose to return the red star into their logo in 2005, a logo which is now organically sown into the landscape of the town, a constant eerie reminder of the country’s contradictory past but also a testament to an enthusiastic local fanbase, the kind which money can never buy. In good news, Velež, having played the past season in the second tier of the Bosnian league, are now promoted to the first and from there, obviously, the sky is the limit. Maybe, this time around, Veles be kinder to his people. 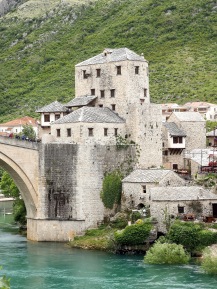 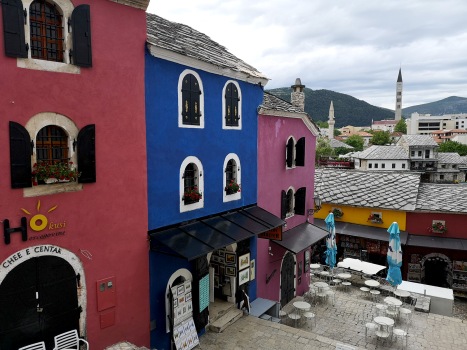 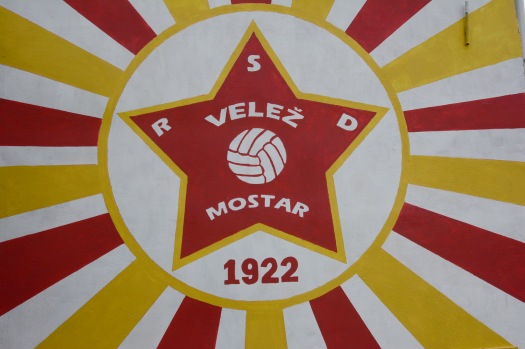 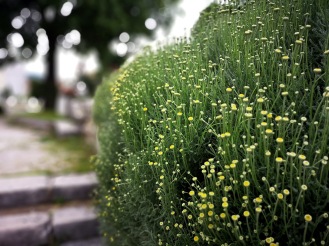 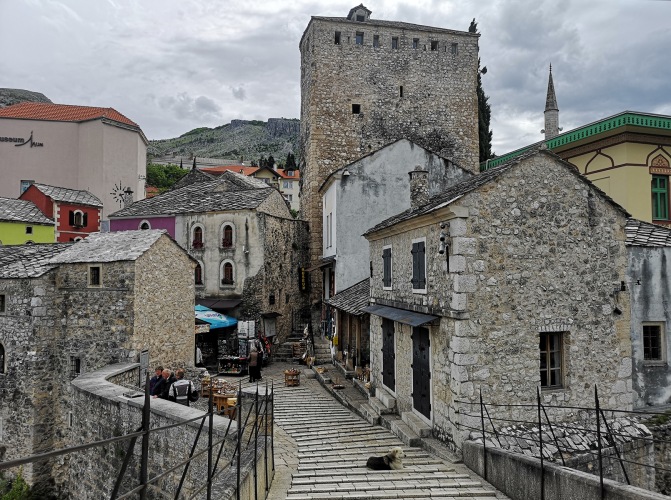 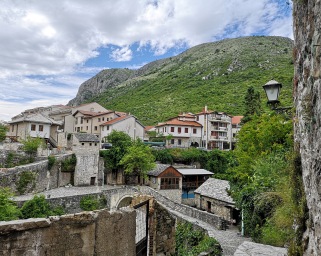 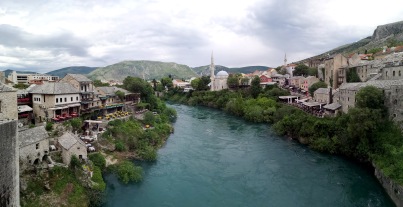 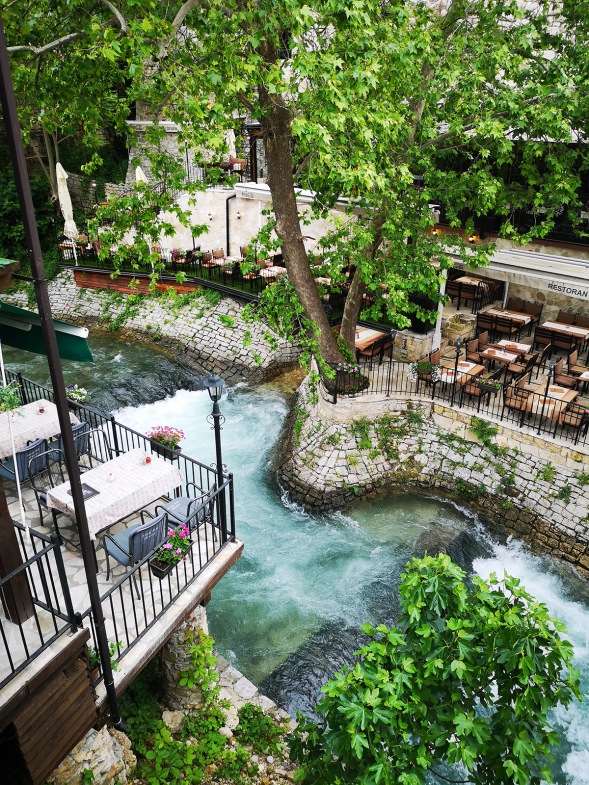