Day five started early with the yearly pilgrimage to the VOLT stage, this time at 3 PM, which in szigetian translates into bloody morning, to catch Black Bartók– previously it’d be for Hangmás, of which Black Bartók is basically a second coming, with a slightly modified line-up. The scheduling obviously meant a scarce crowd idling around with the breakfast spritzer, though at least the location allows for an area of shade right next to the stage, which means there was some sort of a front row, but it proved unconvincing and frontman Endre kept his shirt on in spite of the weather, which is something that would never have happened in Hangmás times, so either he is growing old (and wise?) or simply hated us, or perhaps a combination of both.

We then moved over the alley into the A38 tent for one of the most Canadian things ever to happen anywhere in the universe, namely Rhye, made up of a bunch of very wholesome people dressed as if they were ready to head out to a slightly posh, but still casual afternoon barbecue at one of their best friends’ house, and decided to play some very wholesome and pleasant songs on their way there, often with their eyes closed. Of course, their lead singer has a whiff of Justin Trudeau about him (told you they were intimidatingly Canadian) and one of the wholesome blokes on guitar had a very pretty patterned shirt, flamingoes they were, as it turned out, though at a first glance we’d gone for carrots, which seemed a perfectly logical organic, healthy, wholesome Canadian choice.

Across another alley, on the Europe stage the proceedings were somewhat less wholesome, as fitting Ezhel, a man who has irked the generally very irk-able Turkish authorities so much that he was put in jail for saying a thing or two not to the liking of the government, which (without willing to take Ezhel’s dissident glory away) is frankly not that hard these days, it’s basically called having an opinion on anything. On our sunny afternoon Ezhel’s major issue, though, was a problem with the sound system, which was quite quickly fixed, and in the meantime, he received some unwholesome offerings of booze and other unnamables from the public. The unwholesome Balkan afternoon was continued by our very own Şatra Benz representin’ Romania to an above national average audience (not meaning to read anything into this, but Romanian acts often get very silly time slots) and I was pleased to see that their energy, at least, translates very well to the uninitiated foreigner, though having to actually translate their lyrics gave me a minor brain bleed since English yet again proved very poor at rendering the intricacies of Eastern European curses, expletives and insults.

Meanwhile, on both A38 and the Main Stage my early afternoon dream came true, namely, half naked men! The half-naked man in A38 was Isaac Holman, half of the Slaves, with other half Laurie Vincent opting rather annoyingly to keep his shirt on, though this one was a fine instance as well, setting a pattern of patterned shirts which will reoccur in the near future. The concert was an absolute blast, as Slaves are wont to be, a bit of contemporary punk with just enough melody to win over an audience that might not be fully enamoured with the original genre.

The half-naked man on the Main Stage was Jökull Júlíusson, lead singer of Kaleo. Now, as you may have guessed from his name, these men (Jökull, as any good Viking, comes accompanied by a horde) hail from Iceland and at one point in their lives decided to start playing delta blues. The process of elimination must have been something along the lines of about half of the country writes crime fiction, the other half plays football, this leaves Björk, The Mountain, Baltasar Kormákur and us, what shall we do?! The result thus feels a bit artificial, a product tailored at a specific target audience, just like the shirt Júlíusson is actually wearing fails to cover him in the exact spots it is supposed to. Therefore, the best thing of this is the bloke with the guitar and the nicely patterned shirt. He also smokes while playing, with the cigarette nonchalantly hanging out of his lips. Also, his name is Daníel Ægir Kristjánsson and you only get this snippet of info because I love to spell Icelandic names, particularly when they contain funky characters. After Kaleo the Main Stage became totally irrelevant (not that it was relevant before, Sunday had the worst line up here by far) with Liam Gallagher showing up with his usual cranky self packed in his usual anorak, playing the usual songs of which, as usually, only the Oasis ones sounded mildly interesting, yet they also came with a Noel shaped hole. I am not choosing sides, here, mind you, anything Noel does has a Liam shaped hole in it, and they will probably realize this one day and start to bicker again in an institutionalized manner within the confines of the same band.

I will also waste some rows on Dua Lipa, primarily to celebrate the moment when I felt she must be the worst headliner in the history of Sziget, only to conclude that she is simply too bland even for that- I can perhaps compare her to Ellie Goulding, another powerhouse of releasing the same tepid song over and over again.  I would love to say that having Wolf Alice in A38 at the same time as Liam provided some alternative entertainment, but I am still in the phase of trying to get what it is I should like about them, and miserably failing at it. When it comes to King Gizzard and the Lizard Wizard I a) resent the length of their name and b) resent the length of their song. Yes, singular, the one song they keep writing and playing, possibly since late 1976, albeit none of them were born at that time, and it is a wonderfully executed song, no doubt about that but about half an hour into the concert I felt like Dua Lipa at least game me something to hate, which is a way of feeling alive, uncomfortably so, but alive nevertheless. 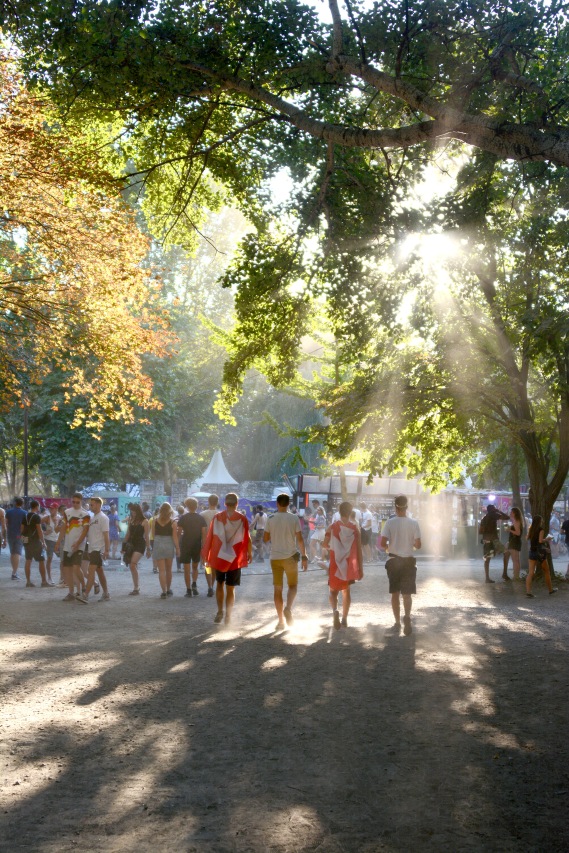 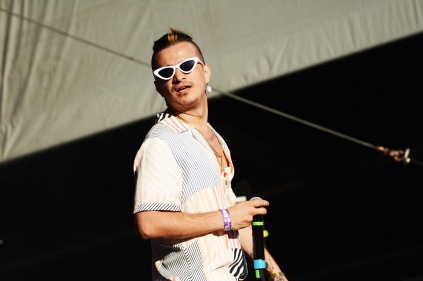 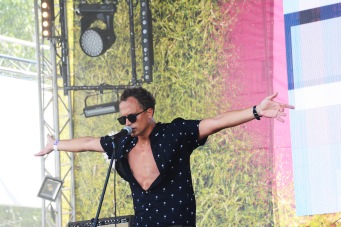 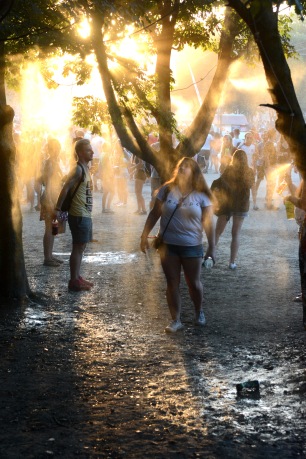 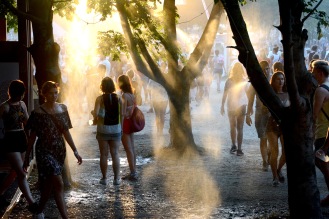 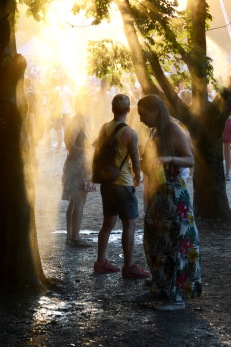 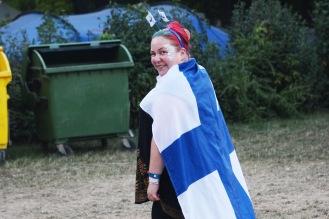 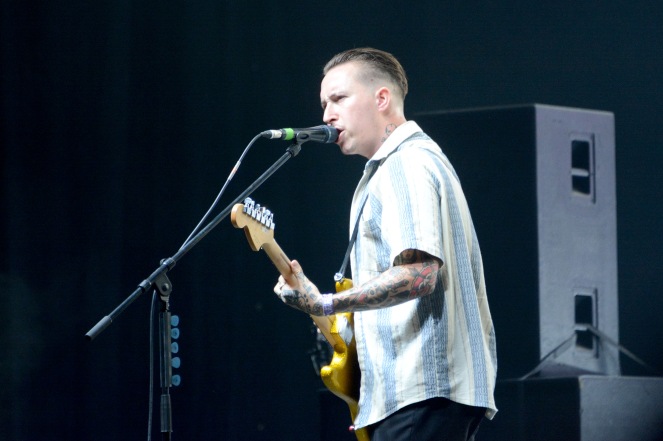 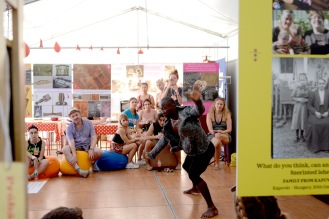 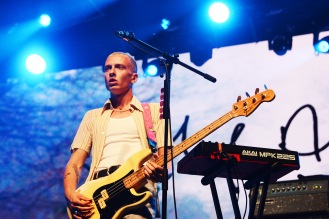 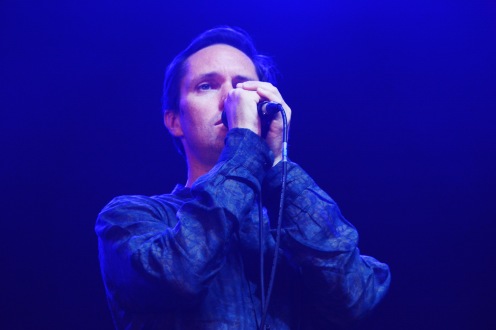 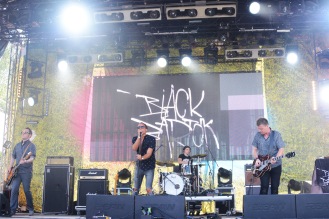 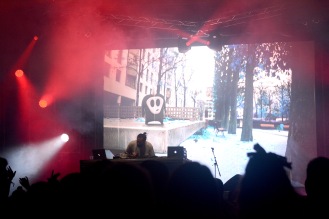 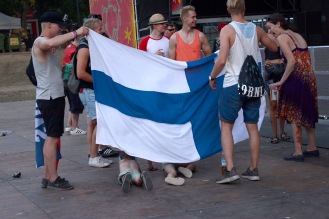 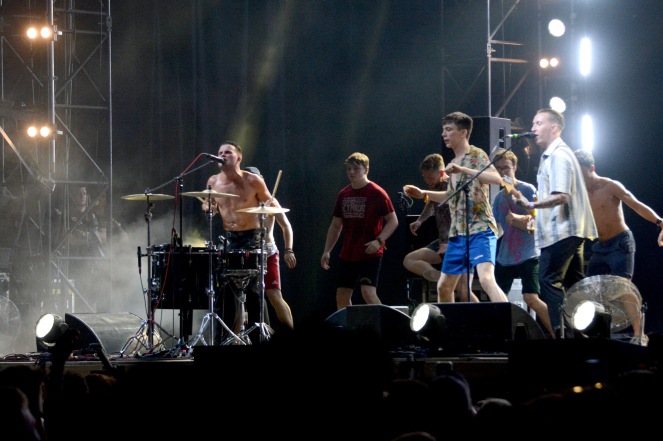 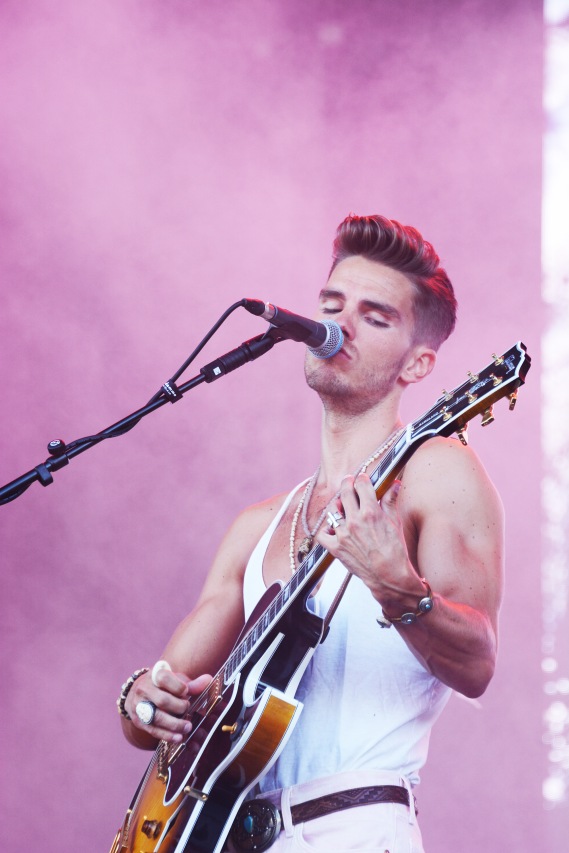 On day six, Milky Chance lost their instruments somewhere on the way to Sziget, had to play with borrowed ones and this made the gig mildly tolerable, if fundamentally uneventful. MØ was back on the island, on her birthday again, and this seems to be turning into a roller coaster ride many usual suspects go through: one good show is followed by one which is a bit disappointing and then the cycle begins again, so luckily for us this one was the good one (for the first time on the Main Stage, she previously played A38 only) and she even seems to have come through diploification almost unscathed, with her original quirkiness and personal charm shining through sometimes too heavily constructed dancefloor zingers.

At this point the Main Stage area was taken over by Shawn Mendes fans surrounded by a circle of haters who described in many bombastic terms just how these poor souls (mainly female) had made their life hell on this beautiful Monday by turning out in their little thoughtfully assembled kits, with glittery face paint and the daily bracelet shining on their wrist like a scarlet letter. And while I am light years away from condoning Shawn, who seems to me basically the new product the Canadians engineered to keep their slot as world leaders of teenage swoon, now that Justin Bieber is getting a bit old and nasty, I can somehow relate to what I must have been like on the day I went to Sziget for The Rasmus. I did not yet have the money to go for the whole festival, and I made tough choices, and then the day came and I spent half of it finding the perfect outfit and then was immensely happy to be on the island for those few hours and yes I did glue myself to the fence during the earlier acts making God knows which Serious Adult Band’s fans very angry.

So, what I did instead of grumbling was plain and simple: I went somewhere else, in our case the A38 tent, to catch late line-up addition Tom Grennan, whose first album Lighting Matches has been on ridiculously heavy rotation on my Spotify. What can I say, it was a blast- strangely maybe the first show of the whole festival that made my knees go a little weak and I might even have had a small tear in my eye during Lucky Ones. Grennan is still in the phase of his career when everything is fresh, he seemed genuinely impressed to be on Sziget, his social media proof that he’d explored the festival beforehand and even got to meet Liam (looking just as miserably poker faced as ever.) The set could not be too long, since he has only one album to pick from, although one admittedly filled to the brim with great tunes, and everything seemed to be just in the right place. Also, I forgot to mention, but the man has a Voice (and a nice checkered shirt for good measure.)

As always when I am under the influence of a show it is a bit hard to take in the next ones, even if all three subsequent acts were actually pretty impressive: La Femme came accompanied by the Frenchest gesture of the night, namely a glass of red wine on the keyboard, Onuka brought some electronica to the World Music Stage and Little Dragon proved the perfect ending of the night whether you wanted to dance, or just hang out on the grass outside the A38 tent, resting after an evening of enjoying whatever the hell you wanted to, for yes, there came a point when a deep, day six tired love for the entire universe enveloped me, and I even felt positively inclined towards Kygo fans. That thought now scares me. 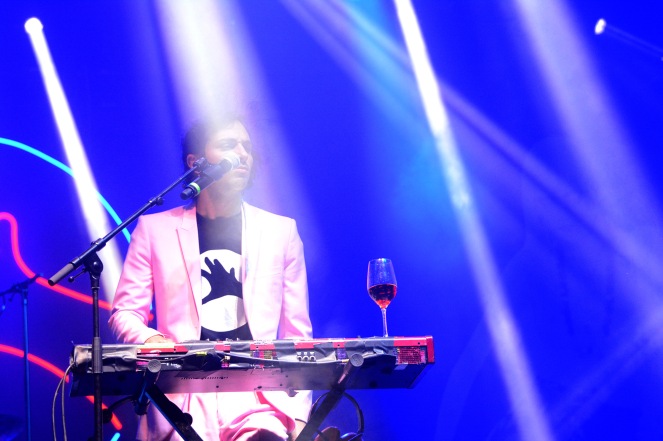 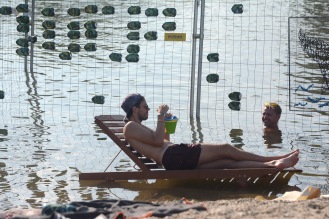 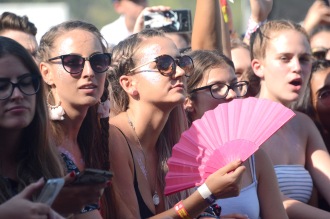 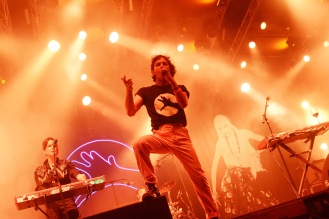 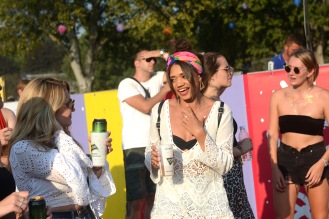 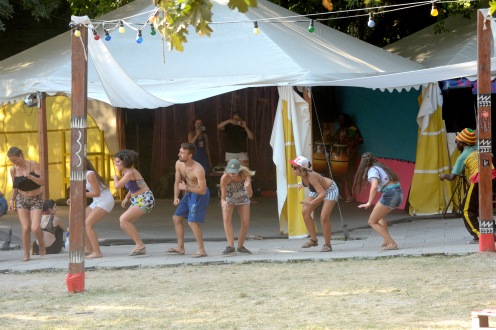 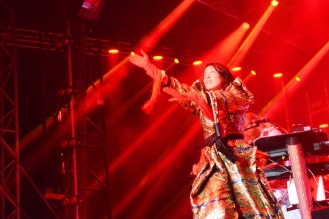 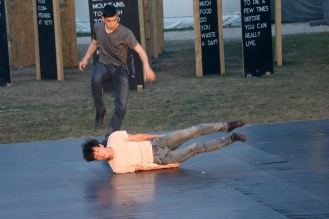 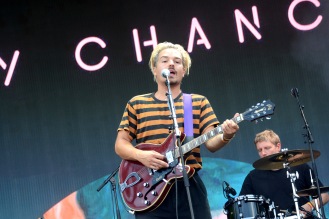 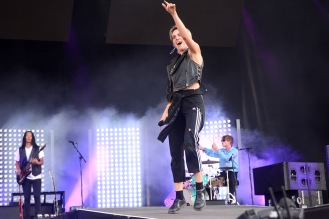 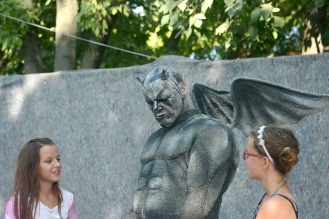 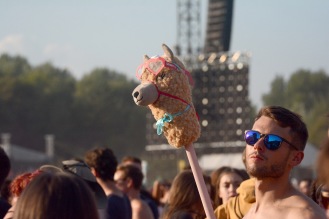 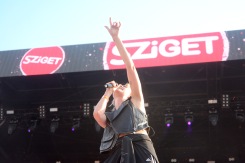