Having gotten over our failed sailing project, it’s time now for the practicalities of this most tentative of Zakynthos guides, and we’ll start with the beginning, namely how to get there and around once you’ve arrived.

Ensconced in the greenery above Laganas bay lies Zakynthos’s understated airport affair, going by the official name of Dionysios Solomos. A good many things on the island are called Dionysios Solomos- I’d hazard that the intensity of his presence is so overwhelming that you’re better off listing the things which are not called Dionysios Solomos. The reason for the love in is that, as you have perhaps guessed, the man was born on the island, and then spectacularly went on to become Greece’s overall national poet, author of the verses which would be set to music to become the country’s national anthem. Seemingly Hymn to Liberty is also the only poem he ever finished in his lifetime, as most of his work was fragmentary at the time of his death, which strikes me as very fitting for a country treating time, deadlines and finalities rather poetically as well.

Returning to the mundane matters of our airport, it is basically a glorified hangar in the middle of not much, lacking both the scenic qualities of Corfu airport and the suddenness of Heraklion landings, though the runway is obviously of the shorter kind and calls for rather intensive braking once aground. The sight which greets you when that’s done is about four Thomas Cook planes being loaded and unloaded- the main summer traffic of the airport is of UK bound charters. WizzAir operates a once a week connection with Budapest, on Thursdays, from mid-June to mid-September and a few other, mostly budget airlines such as EasyJet, Germanwings, Transavia or BlueAir also have connections to major European cities.

If your airport transfer is not sorted by your travel agency, your best bet is the local cab company, Zante Taxi. You can book your ride online in advance, and they have fixed fares, though they do admit that some drivers will occasionally try to somewhat adjust the prices- our experience was however wholly positive this time around, with the cab being on time and the list price being respected by the drivers.

Given the size of the island, public transportation is not particularly well developed and since locals do not use it much to get around, the timetables are somewhat fluid. There are two main routes running towards the south from Zakynthos town, one towards Laganas and another towards Vasilikos, and two towards the north, one to Tsilivi and one to Alykes. There’s an infrequent connection towards Volimes as well, which is the landlocked town closest to the unseen wonder of the Shipwrech beach.

We happened to be positioned along the Zakynthos to Vasilikos route, in the town of Argassi, and as such fell into the fiefdom of Alexis the Great- who is thus not a hero of olden legends, but a flesh and bone bus driver of a rather volcanic disposition, ruling his route with an iron fist and frequent yelps in Greek, which could be anything from a friendly greeting to a curse going down generations of your family tree.

His arrival times are mysterious estimates- Vasilikos is a rather large resort with several beaches dotted along its shores, yet the last time of departure is 18:40 throughout an area spanning a roughly twenty minute ride, so your best guess is to show up at a designated stop about 10 minutes earlier, just in case, and then wait for the mercy of the Gods to bring the bus about, and the whims of Alexis to let you board it- one of his favourite pastimes is to descend from the vehicle, have an angry walk in its proximity while puffing his cigarette and only then allow his bewildered spectators to get on. The good news is that you can both travel and witness Alexis’s showmanship for a mere 1.8 euros, with the only route costing more than that is the epic ride to Volimes, at 3.6 euros the fare.

The obvious other option is to get around by car, scooter or quad. Each resort is dotted with plenty of rental spots, and most hotels have contractual partners that they can direct you to. Should you arrive with your own car through continental Greece (which is what about half the population of Romania seems to have done, travelling to a Greek island is still as efficient at plate number spotting as my childhood cross country rides were), you can take the ferry from Kilini at 9 euros/person and 29 euros/car or 9 or 14 euros/motorcycle. The crossing lasts about an hour and there are seven connections a day during high season. There are also two daily connections to the island of Kefalonia, leaving from the northern port of Agios Nikolaos.

Where to stay. Somewhere on the south-east coast, by all means. The Vasilikos area has the best beaches, and they’re close enough to each other to allow you to beach hop even on the same day. Both the airport and Zakynthos town are also in comfortable proximity. The Laganas bay area also has good beaches, and more direct access to Turtle Island and the Keri caves, for those who feel inclined to wildlife spotting and the likes. Though we have only ogled the north-eastern beaches from afar, they do not seem quite as exciting as the one further south, though Alikes was recommended to us as a nice family friendly resort, but since we are neither nice nor a family we feel somewhat immune to its charms.

Our final choice was the mid-range mid-price Zakynthos Serenity, which proved a very good value for money. It’s a stone throw’s away from the bus stop, several good restaurants and the local beach, but far enough from the main road itself to be quiet at night. The rooms are clean, spacious and mostly quiet, and our came equipped with a view of the sea and the church’s bell tower. Breakfast can be had at the nearby Family Inn hotel of which you can also use the pool- using the pool seemed a matter of capital importance, and it was a fine pool indeed, but I will never be able to fully understand people who go to a seaside resort and then rot by a chlorinated pool all day long.

Riding the bus of Alexis on our way to Vassilikos uncovered many stunning views and I identified several villas on the way which could provide both great scenery and at least partial seclusion- Ananda residence (which I’d first obviously read as Anaconda) for example seems ideal for a group of 6 to 8 people, in which case the cost per person of a week’s stay is around 300 euros. If travelling with a small tribe is not your thing (nor it is mine), the Ionian Hill has good options if you book well in advance (which we haven’t). 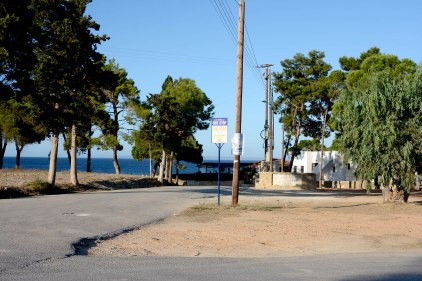 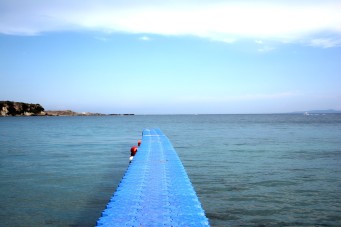 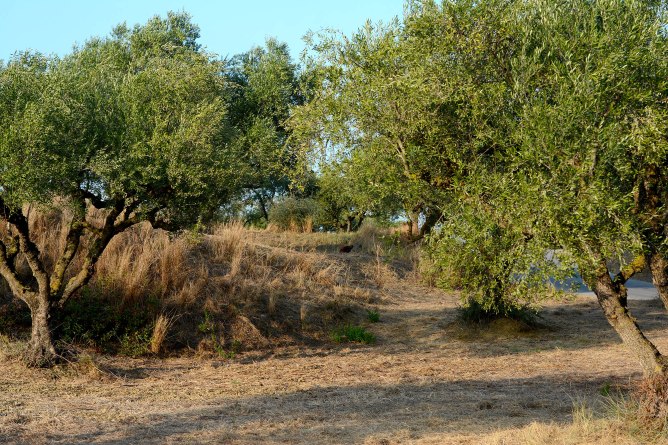 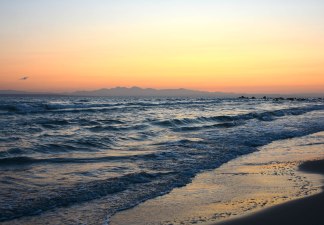 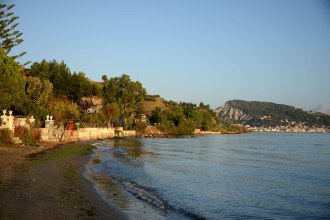 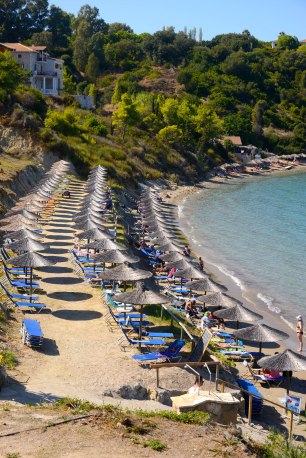 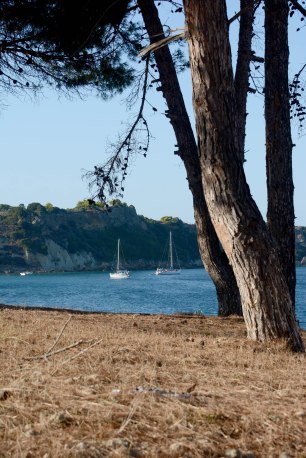 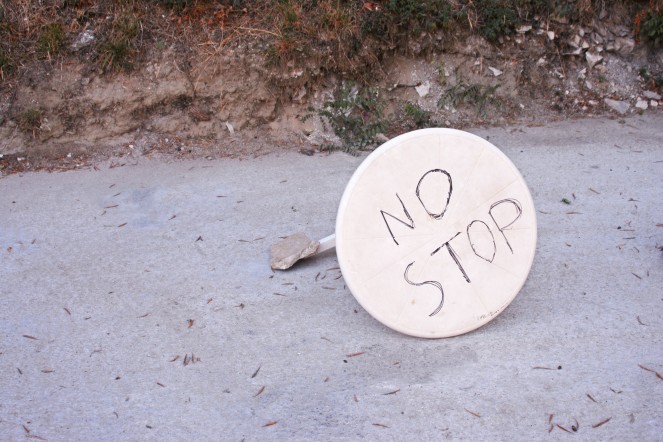 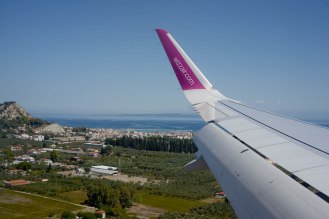 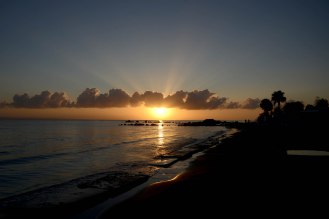 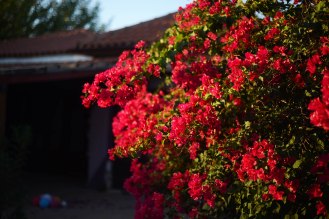 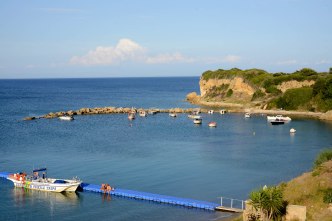 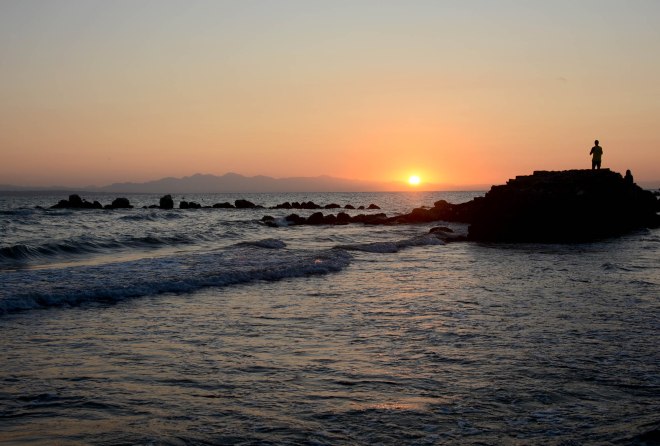 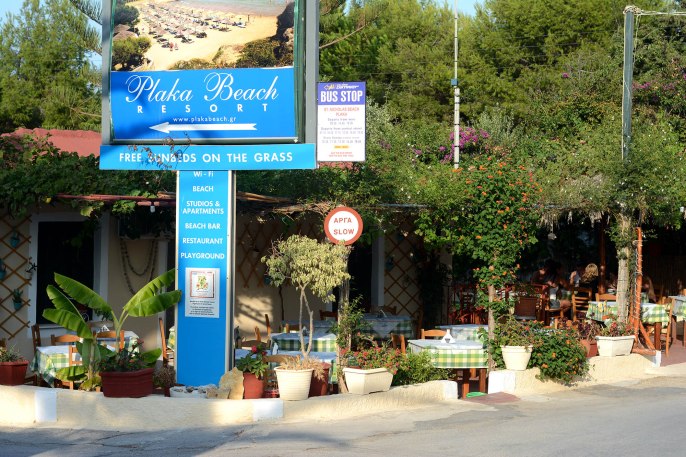 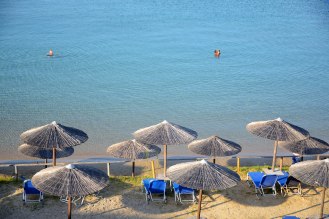 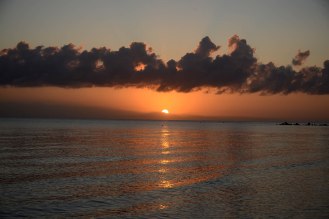