Since last year’s very efficient guinea pigging allowed me to put on the radar any previously unknown, but perhaps promising acts, thus avoiding that atrocious moment when you realize you kind of fancy someone right after they’ve played Sziget, I might as well make a tradition of it. Three Sziget announcements have given me enough material for a first installment- and in case all future announcements will only shower super exciting, super familiar names, well, that much the better. I do have a feeling that this won’t be the case, but no matter what the future brings, here we go.

Anne-Marie I assumed the song with the most Youtube views might be a promising start, so I jumped straight into Alarm. I quickly concluded this must be somebody else’s song I heard several times while perusing the socks section in H&M, and dropped the buy 3 pairs for the price of 2 pack out of sheer panic when they dropped the base. It later dawned on me the somebody else might be Rihanna. Super objectively I gave her a second chance, so  I discovered that on the next masterpiece (Do It Right) she tries to rap, fails, and then decides to pretend she’s Rihanna again. At this point Karate seemed to be an improvement over the rest, but maybe I had just lowered the bar. But then she started rapping again and the whole universe became just a little sadder. Gentleman seems to bring a twist, as instead of Rihanna, little Anne-Marie tries to be Adele, but for fractions of a second sounds much more like Florence Foster Jenkins. Abject fail, so we promptly move on.

Bear’s Den are basically Mumford and Sons romping through a campus, sporting beards and beanies on their way out from Greek Philosophy 101, where they just discussed the concept of agape, and decided naming a song after it will sound sophisticated enough to land them some girls at the next campus party. I do reluctantly have to admit that their plot has a very high likelihood of succeeding. The next piece, Above the Clouds of Pompeii, was written on the way out from Roman History 101, but loses out on the novelty factor somewhat, as those pesky guys from Bastille covered the subject matter before. The boys do love to keep busy and attend Greek Mythology 101 as well, so we dash straight into Elysium, then through Bible Studies 101 to Isaac to English History 101 and Think of England. This is crazy, covers pretty much all the basics of a humanities major, and keeps on sounding catchy as hell albeit somewhat sparse and over-familiar. This being said, a pass.

Nothing but Thieves are a bit more confused as to what genre they should belong to, and since they sound a bit like too many things, including scary associations such as Foals with My Chemical Romance, they also sound a lot like nothing. As I listen to Itch I also discover that they opened for Awolnation, which is one of those bands I always listen to with bemusement trying to find the point to their music, and inevitably and miserably fail, and sadly Nothing but Thieves seem destined for the same fate, although I see one or two glimmers of hope, such as the rather better crafted Wake Up Call. A borderline case for the time being, we’ll let the live show speak for itself.

On we move to LÉON then. The recent history of Swedish music, an otherwise spectacularly productive enterprise, is basically a constant attempt to try and sound melodic without producing acid flashbacks of ABBA belting their souls out in electric pink silk jumpsuits. LÉON is mostly successful at said endeavour, though that unnecessarily capitalized four letter name might be misleading at first. Although she’s being hyped in Vogue, which is quite possibly a curse in disguise, her actual output is still quite scarce and teetering somewhere between jazziness and electro beats, with rather Taylor Swiftian cheating boyfriend  themes, such as the decidedly moany Liar. Another dubious call, though for the time being more a fail as the overall picture is just a tad boring. (Perhaps missing a pink silk jumpsuit actually).

Next up is Andy C, one of those baffling and apparently codependent knob fiddlers who seem not to be able to make songs alone for the life of them. The first output I stumble upon, then, is a collaboration with a certain Fiora, Heartbeat Loud, which I forget as soon as it’s over. Shockingly I then discover a truckload of tracks which he seems to have crafted alone, and a bad moment for humanity that was, for they are songs you forget right in the middle of being played. The confusingly named Workout would decidedly suck as a workout song too, the beats being way too uneven even for an aerobics routine. Abysmal fail.

Cashmere Cat as a name sounded fairly promising, like perhaps some silky oriental sounds akin to the fur of a Russian Blue, but he actually turns out to be yet another knob fiddler- Norwegian this time, which works moderately in his favour, but only until I listen to his first song, Adore, which has vocals by Ariana Grande and is just as instantly forgettable as the worst of its kind. There’s several other songs, which feature various Latinas (besides Ariana, he’s also branched out to include Selena Gomez and Camilla Cabello), but nobody can tell the difference, nobody really wants to, and especially nobody really cares. Another fail then.

I will proudly confess that Taylor Momsen, alongside all of her high flying projects such as Gossip Girl or The Pretty Reckless has been very very far off my radar until recently, and those were brighter, happier times. But since an eerily large number of people seemed excited about their impending arrival, I sacrificed my peace of mind and pressed play on something very aptly named Make Me Wanna Die. As far as that goes, the song is actually quite successful, though I can’t describe what it sounds like, perhaps a big sad cliché of what an advertising company might think rock should be like, and in that vein Taylor struts around low-cleaveaged and kitten eyed. A sad waste of quality eye shadow, and when on the next track she belts out the constructive input of wish I was dead all I can retort is, me too, Taylor, me too.  (In case you’re still confused, yes, this is one gigantic fail.)

Vince Staples starts off slightly on a wrong foot, as I cannot help associating him with stationery, which might not be the most street cred of things for a rapper. On the other hand, perhaps we should be thankful that the man uses his own name instead of becoming something like Vin$$e, or Vizza S, or perhaps $tapla. Things get even better, as upon investigating output such as Fire or Norf Norf I must conclude that ‘just Vince Staples’ crafts pretty enjoyable tunes, and, unlike Anne Marie, he can also really and very honestly rap. He has thus deserved a pass.

GTA aren’t all that easy to identify on Youtube, because, obviously, Grand Theft Auto, which was apparently and indeed the very inspired reason why they opted for this name, although in the long run they have decided that Good Times Ahead is better. This is also where they started to lose me, but at least I located some of their tunes, and joyously discovered that the first option includes above mentioned Vince Staples. Little Bit of This is therefore passable, but everything else, featuring the now usual various array of more or less renowned collaborators, is exactly as average as you’d expect from two guys going for such a rubbish name choice. GTA have thus failed miserably.

PS and user manual: In case for unfathomable reasons, your taste is oddly different from mine, and find the above analysis biased and irrelevant, just flip the ratings and go to the acts I dislike. It’s a win-win situation which leads to the balanced distribution of the populace on the island. You are more than welcome. 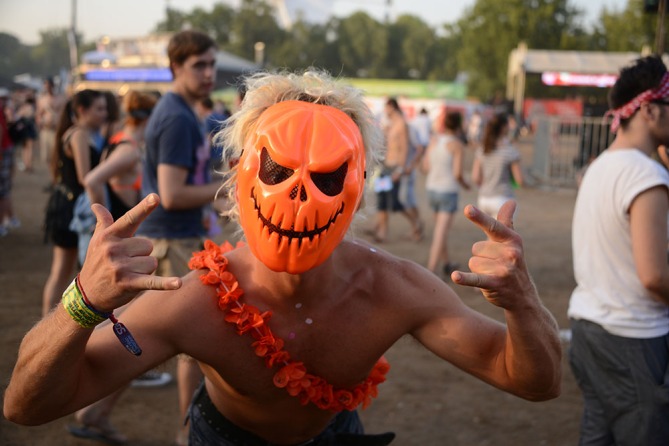 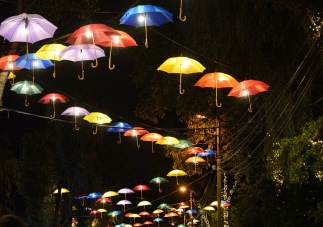 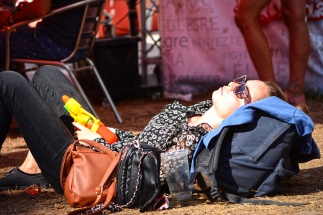 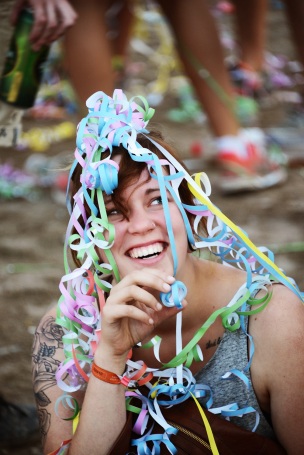 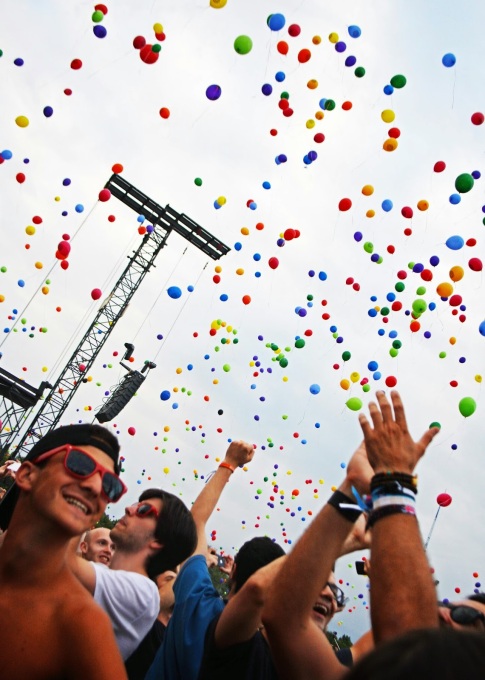 If you wonder where did everyone go, the French disc chevalier is on the Main Stage. 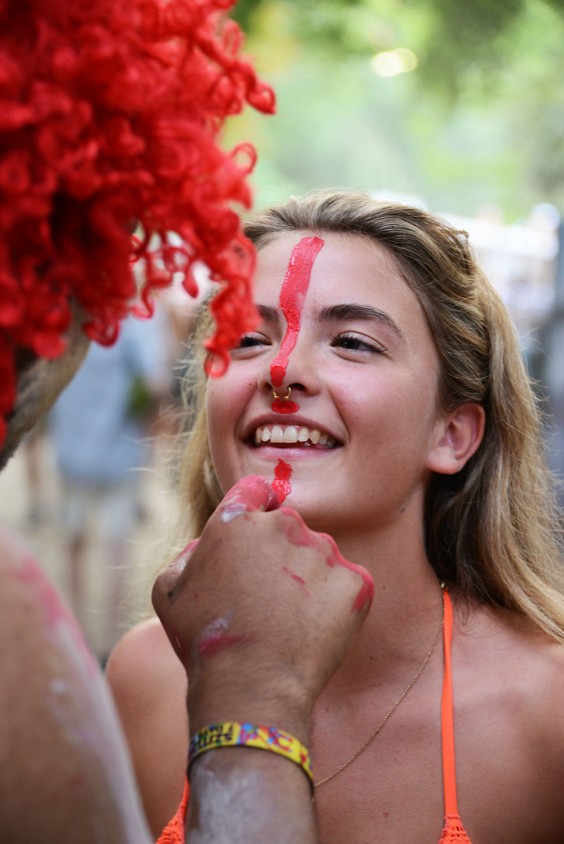