Skip to content
As the A38 tent became larger and more centrally situated, the organizers started packing it with ever better acts, so much so that it technically became the festival’s main attraction to a rather numerous crowd, which numerous crowd gets stuck outside it every now and then. This is promptly followed by floods of complaints about how dangerous it all was and how unfair it is that popular acts should be programmed to a stage which has a very precise capacity, unlike the outdoors venues. The whole situation is of course made even more complicated by the infamous 11 PM main stage curfew, so acts which need darkness as a backdrop but don’t necessarily have the pull of an undisputed main stage headliner will unavoidably end up in the A38 tent.
Case in point, M83. As the baffled crowd started to disperse after Sia’s show, it became ever more evident that the flood is aimed almost exclusively at two targets, namely the exits and A38. (Which actually has a second sponsor these days, major Hungarian bank OTP, a situation which creates much confusion when rookies call it OTP stage and most people inform them they are very wrong and should look for their Holy Grail somewhere else.)
I will very frankly admit that when M83 came on my radar, which was pretty late and naturally around the time of hit single Midnight City, I assumed them to be firstly a band in the full sense of the word, and secondly American. After some careful investigation I however learned that they are basically the musical project of Frenchman Anthony Gonzalez, who by 2011 happened to live in LA, which is a very rock and roll thing to do even if your actual genre is electronic music. I also realized M83 had actually remixed Bloc Party’s The Pioneer for their remixed retake of Silent Alarm, and that was one of my favourite tracks from the album.
So I was basically somehow aware of their existence, yet hardly ever listened to them- which actually stays true to the present day. There is that category of bands you somehow fancy, will nod in recognition when their name is mentioned, you might even name check and enjoy some of their songs but they’ll just never enter your heavy rotation playlist, nor will you spend time listening to any of their full albums. I had however been informed by people in the know that M83 is pretty spectacular live, therefore I made sure to sneak into the tent on time, and I was not disappointed.
Songs which seemed pretty dull and uniform in their recorded version got a new lease of life on stage. Returning to the starting point of this piece, they are actually perfectly matched for the size of A38- the band filled the space very well and looked confident and comfortable doing so, while the visual backdrops were visible to most of those in attendance, thus ensuring that everyone enjoys the show at its full value. And although M83 is mostly a one man endeavour when it comes to writing the music, they came off as one of the most cohesive acts of the festival. As a photographer, you’re often stuck with your lens pointed at the lead singer with everyone else lost in the dark background, but with M83 there were plenty of exciting things to snap wherever you looked. This flurry of activity could be sensed in the musical delivery as well, which kept you connected from beginning to end. Speaking of which, Lower Your Eyelids To Die With The Sun works wonderfully as the outro for a concert- when first hearing it I could totally picture it as the soundtrack for the scene of a movie in which our heroes are shot out into outer space in slow motion, and if M83 manage to replicate that feeling when closing their show- they do- it means that they’re doing things right.
The song also reminds me of Sigur Rós, so let me then mention how they won’t make it to the top ten, and it’s absolutely not their fault. Having them play at 7 PM in the run up to Muse is a recipe for disaster. They probably fell victim to a state of limbo in their popularity: they have a steady and pretty religious following, but probably not enough for the 9:30 PM slot. On the other hand the organizers might have been afraid of the A38 stampede factor and sent them into exile between a colour party and the operatic hysteria of Muse. The end result was akin to asking a bunch of frenzied Labradors to quietly watch the descent of a falling star- the stars burns, twinkles and fades bringing with it the icy beauty of outer space, but all the Labrador will want is something to fetch, and you can’t really grasp a shooting star. 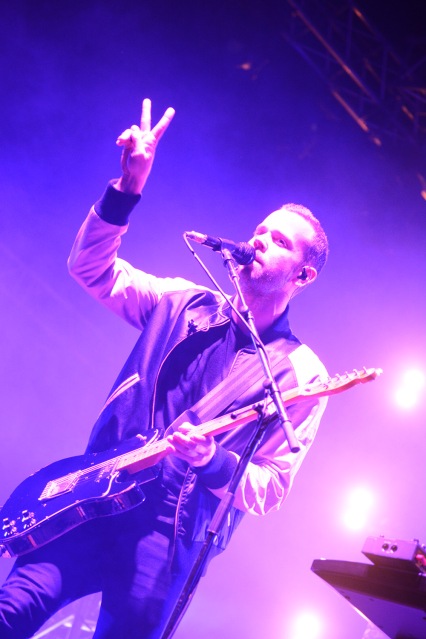 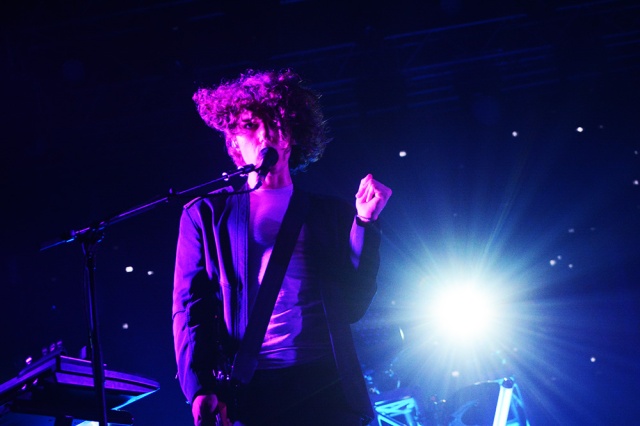