We begin the second installment of the Europe Stage review, naturally, with Canada. While this might sound odd, perhaps it isn’t, after all, the already mentioned Eurovision has adopted Australia, and I’d always thought Canada would be a great match too- in all honesty, they did once kind of send Céline Dion, albeit she belted out her heart in that scary Eurovision soprano manner on behalf of Switzerland- and won, screaming ladies used to be big at some point in time. Mercifully The Lytics are a completely different poutine: they rap, and as all rappers they are upset about many a thing, yet they do it (swear to God this is the last Canadian stereotype you’re getting today) in a very polite and wholesome way.

Next up, well, it’s Africa, South Africa namely, with Moonchild Sannely bringing some ethnically infused electro pop. It’s of course not necessarily a prerequisite, but weak minded festival goers, especially after a sunstroke and/or severe soak, do enjoy an interesting visual presence on stage, and Sannely seems to like plastic forks as headgear, which is also a very festival thing to do if there ever was one. We return to the old continent with Spain’s Sexy Zebras, whose themes seem to take great leaps from explicit sexual desire to  explicit political protest, so we come to the conclusion that the basic point is the explicit bit, but at least they mostly keep away from salsa rhythms, which is always my great fear when listening to any Iberian musical output.  Also, I do understand not all Latin (dance) music is a salsa, and that calling it generically might be offensive to those truly familiar with the genres, nevertheless they do sound alike to me. So it’s me, not you. Really.

Placing Beissoul&Einius on a musical map can be somewhat intriguing, geographically though they come from Lithuania, at least Einius does, because Beissoul seems to have been born in the Ukraine. So we’re fully confused here, and their videos don’t help dispel the mystery either, which might actually be a point in their favour. We’ll stick to mentioning we can ballpark the music as electro and they have an album which begins with a hashtag.

We now arrive at Romania’s representatives (just one band, sadness), which is again a Eurovision-ish feeling, as in you want to like it out of patriotic duty but sometime you just can’t and then you have to show a poker face while secretly rooting for some obscure Icelandic entry. Șatra B.E.N.Z. do tap into the recently popular Romanian trap trend quite successfully,  and while investigating the scene I also found out that my hometown of Arad is apparently at the forefront, though Șatra B.E.N.Z. (unnecessary capitalization, especially with full stops, does annoy me somewhat) aren’t one of us, this makes them a bit less exciting.  So be it though, it’s not inherently bad, but a bit monotonous after a while, and they do also feel like they insist on being explicit with every second word just for the sheer mindless fun of it. But by all means, come see them! (Promoting locally bred cultural phenomena, tick.)

Next up, well, this is where I lost it, sort of. Thom Artway comes from the Czech Republic (perhaps Czechia?), and in spite of the wannabe Anglicized name looks exactly like the guy who gets his head stuck in a fridge in the background of a Czechoslovak absurd comedy from the 60s. Actually, he looks like that AND Ed Sheeran, and he sounds a bit like Ed Sheeran, as in an Ed Sheeran who instead of drinking stout indulges in pints of pilsner, and all these pints are a waste. Someone help me. And them. And the world. More beer, less heartfelt crooners.

I wasn’t helped: Peter Aristone, from neighbouring Slovakia is crooning too. Is this big in the former Czechoslovakia lately? And if yes, why? Upon closer inspection, though, Peter seems somewhat more melodic in a mumfordsy way which might just prove popular this summer due to the presence of the Mumfords Themselves on the island.

I am probably (certainly) a horrible person, but in spite of spending most of my time in Budapest, and a considerable bit of that time in concert halls, I was not aware of either Hungarian bands in the line up. Strangely, they also sound pretty similar, with Run Over Dogs veering into a more Queens of the Stone Age direction, visuals included, whereas Shell Beach has a whiff of Linkin Park.  This also explains my ignorance, as especially the latter were never my cup of tea, and, as amiably mansplained to me by a friend, I only like Queens of the Stone Age since Josh Homme and Alex Turner have started to sip mezcal together at the same hairdresser’s.

The Poppers from Portugal happen to be one of my favourite discoveries from this lot, with a sound that is at the same time a bit strokes-y, a bit desert rock a bit UK indie, with visually very satisfying videos and engaging  live performances. Yes, I am swooning a little and also, yes, in spite of the love in I still read them as The Poopers each and every time I glance across their name. Further crooner alert, this time from the East (perhaps I can reenter the graces of my Czech and Slovak readers by mentioning that they were always the West to me), namely Omer Netzer from Israel, and I will ask for a time out to decided whether he sounds more like Damien Rice or David Gray.

I occasionally like to spend my time usefully pondering the great questions of the universe, like what would my preferred super power be, and I always end up by deciding it would be the ability to speak all the languages in the world- I even thought up a superhero name for that, Glossa. and Glossa would know exactly what Slovak rapper Strapo is on about, because for me it looks like he is really, apocalyptically unhappy with the quality of his hotel room.

Returning to Israel, the first The Paz Band song thrown at me sounds like what they assume is an edgier take on a Bond theme tune, with a title to match, Got to Stay Alive, with the rather arresting lead singer playing either the Bond girl, or, because that’s not so fashionable anymore, a devious stiletto wielding villain disgruntled by the fact that James has taken to drinking Heineken. I will break my own rules here, because the great thing about writing your own blog is that you can be both its autocratic leader and poetic rebel, and not go with the website order I respected so far, so we can close the Israeli section with Sol Monk and Jenny, and most of the footage I’ve found points to the direction of light hearted summery jam sessions, which should be a perfect fit four the Europe Stage.

Here comes more rap I don’t understand, but Glossa would, from Turkey this time, courtesy of Ezhel, so I am trying to build a coherent picture out of the few words I do grasp, Ezhel being pissed off atop a derelict looking building, Turkish hipsters walking a dog, a man dancing with roses in the middle of traffic, a girl in a car putting on lipstick and a man in an Aran sweater knock off playing with his tesbih, all here for your entertainment.

Rather satisfyingly returning to a topic we started off this piece with, here comes Australia, namely Electric Fields, who combine electronica with elements of indigenous Australian music, and would have been a perfect match for Eurovision in its early noughties ethnic music frenzy. There isn’t all that much online material about them, bar some live shows, so their Europe Stage gig might be the perfect time to get better acquainted with their sounds.

And finally, let me mention the man who is in my humble opinion the best thing to happen to the Europe Stage this summer, and one of the gigs I’m looking forward the most from the entire festival, and Lord Almighty, he comes from Jacksonville, Florida: it’s Astronautalis, I already swooned about him here, so I won’t insist all that much. Just make sure you don’t miss him if you’re around.

PS: First half of the round up here. The photo material below covers some bands we checked out on the Europe Stage in 2015 and 2016: Tony Baboon, Gray Matters, Golan and Sattelites (Romania), Sattas and Ceza (Turkey), Joe Bel (France). 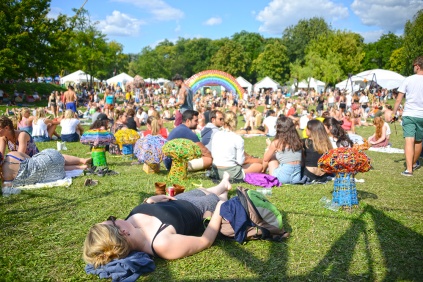 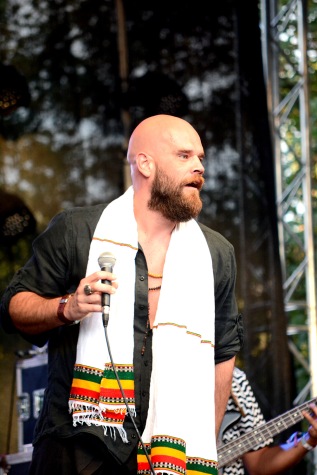 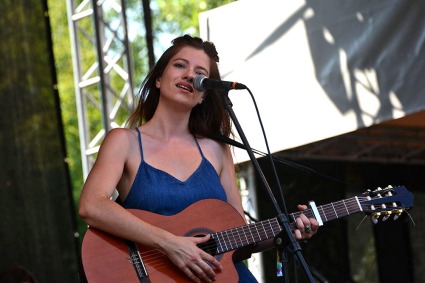 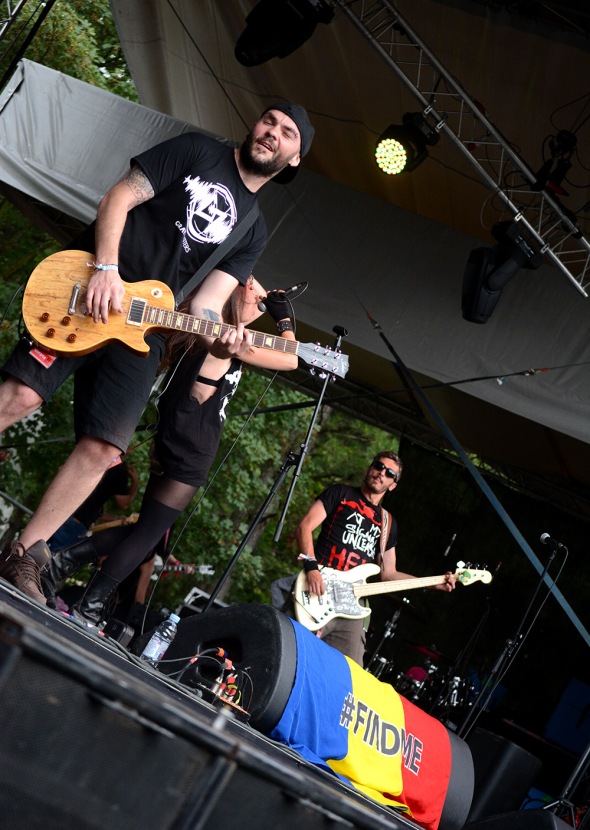 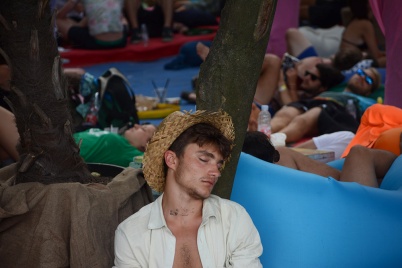 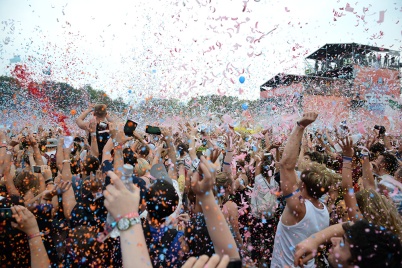 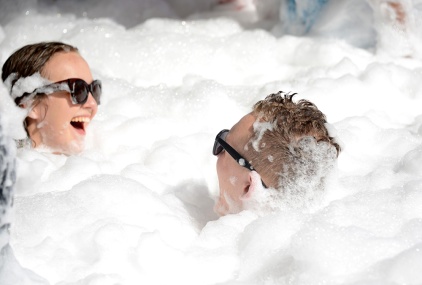